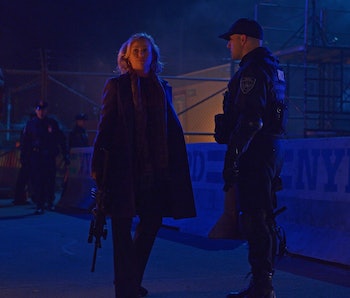 The Strain is such a plot-heavy series that even an episode that promises all-out war, right in the title, “The Battle for Red Hook,” action remains secondary to story. Unfortunately, this week’s story goes almost nowhere.

After Kelly’s attack on Fet’s apartment, The Master knows where Setrakian and the rest of the Scooby Gang are hiding. Councilwoman Feraldo, convinced that Red Hook is safe, gets forced into action by Eph and Setrakian. After holding off a Strigoi scouting party, Feraldo rallies an army of New York’s finest — and its citizens — to shut up and nut up.

There’s a lot of action in that little block in Red Hook, but with its dark lighting and tight lens it doesn’t feel as grand or majestic as it should be. Further undermining the uncomfortable imagery of militarized police, is the lack of concern said police appear to trigger in locals. It’s a very different take than what we see on Fear the Walking Dead, which is just a way smarter show. The Strain brings people together for a Kumbaya fist fight.

Elsewhere, our heroes assemble. Dutch and her GF, though going through relationship problems of their own, rally with Fet and Martinez while Eph and Setrakian go after Eichorst who has waltzed his way into Red Hook. During a slow, one-sided shootout, Eichorst yaps to Eph that Kelly never gave a shit about him in the first place. It’s likely Eichorst just psyching Eph, but with his psychic connection to Kelly it’s not far-fetched and adds juiciness to Kelly’s stale story.

Setrakian name drops the Strigoi like a bomb to Feraldo and her men, who appear unfazed by the concept of ancient Romanian vampires. Because of their flexibility, they’ll be noble allies as New York marches towards an uncertain future.

This week was a lot of shooting, not a lot of talking, but even talking didn’t get us anywhere significant. Feraldo is a stronger ally, perhaps, and Eichorst’s presence in Brooklyn will be troublesome. But with only a few weeks left this season, a lot will have to be done to make up for this week’s stalled distraction.