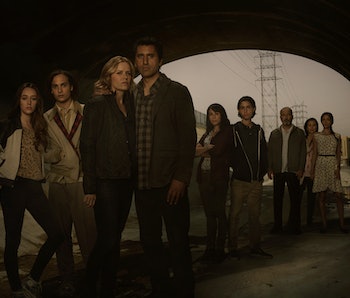 That’s a formula for successful entertainment, but in the age of pandemics and global warming, it’s also a cop out — a way to get off on destruction by embracing myopia.

The structure of the show presumes that the audience would have a hard time becoming invested if the narrative concerned the many instead of the few. And that absolutely makes sense, but it’s notable that we don’t even have a Brad Pitt in World War Z-type character here who can see the scale of destruction. We get one family and if they survive that’s good and if they don’t that’s bad. We identify with that family. And, yes, that’s a bit of a problem. To whatever degree the wildly popular Dead show trains Americans to see disasters as personal rather than national or global, we’ve got a problem. Could this narrative focus on the recognizable few instead of the faceless many insidiously influence a wide, massive audience and their understanding of crucial public policies? Do we ignore the pressing disasters that threaten us on a global scale because we can’t see the affected faces? And is Fear the Walking Dead passing up a chance to answer the origin of the zombie mutation a missed opportunity to inspire the value of hard evidence?

A personal crisis at the end of the world amounts to nothing more than sound and fury. It signifies absolutely nothing.

Think of zombies as a metaphor for climate change then consider the big questions prompted by the plot of Fear the Walking Dead. Would we ignore overwhelming evidence of looming disaster? Would we dismiss science for making us uncomfortable? Would we feel powerless?

The obvious difference between a zombie apocalypse and climate change is that a zombie poses a local danger whereas climate change, invisible to the naked eye, threatens the entire world. Well, that’s true to an extent, but a pandemic is a pandemic and zombie-ism on Dead shows is presented as such. The issue here is global and scientific and complicated and hard to discuss on a macro level within the confines of an hour-long broadcast with commercial breaks.

It’s part of the architecture of fictional narratives to hinge on character. This is why Rick Grimes, who’s coma-eliminated even the possibility of a conversation about containment from the first show, has a famous face. Now we have Travis Manawa, who just wants to do the right thing for a very small group of people. Survival horror has always been about keeping a group together, and Walking Dead has followed that tradition. It’s good writing, but bad timing.

This is categorically false. Most shows deal with that stuff nominally, which is pretty much the Dead approach. It’s the rare show that takes a broader view and a genuine intellectual interest in disaster.

In fact, The Walking Dead’s entire saga is stunningly anti-science. The first season finale of the original series involved blowing up the CDC — and no one has looked back. The only character who ever talked about science was Eugene, who was lying the whole time. These shows are — and they drive the point home again and again — for survivalists, not humanitarians or big thinkers.

FX’s The Strain provides an excellent counterpoint. In that world, New York City has a vampire problem. The main characters don’t just want to survive; they want to take their city back. They are mostly scientists and they work in labs and they have a sense of hope.

It’s somewhat fitting that the spinoff show should be set in California, which is shriveling up like one of those raisins that used to bear the state’s name. As goes the West Coast, so goes the future. And if the heroes of the future are just getting by, well, we don’t have a lot to look forward to and we have even less to look up to.

Robert Kirkman didn’t owe us anything, but he could have been a hero by giving us one. Instead, he embraced inidividualism, which is a great premise for a story and a terrible way to save the world.