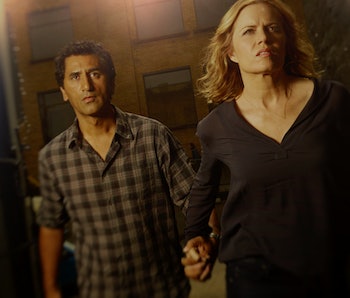 AMC is starting to specialize in scoring huge numbers in the spinoff game. Their Breaking Bad companion series, Better Call Saul, was the previous cable premiere record holder in the 18-49 demo with 4.4 million viewers when it debuted in February.

Fear will run a six-episode first season before it returns sometime in 2016 with a second season, and will set up the next season of The Walking Dead when it returns in October.

Fear’s numbers may look impressive, but nothing seems to be able to beat the original. Its ratings have steadily increased in each of its five seasons, with the fifth season premiere setting a ratings record of its own by pulling in 17.3 million viewers overall and 11 million among the 18-49 demo. The 90-minute fifth season finale counted 15.8 million viewers overall with 10.4 million in the 18-49 demo, which was a record for cable season finales.

More like this
Entertainment
Sep. 26, 2022
Christian Bale reveals the secrets of his “weird” transformation in Amsterdam
By Jake Kleinman
Science
Oct. 1, 2022
Ancient humans forged hybrid species at critical periods in our evolution
By Penny Spikins and The Conversation
Science
Sep. 24, 2022
Is a fact always true? A philosopher explains how to spot the difference
By Peter Vickers and The Conversation
Related Tags
Share: