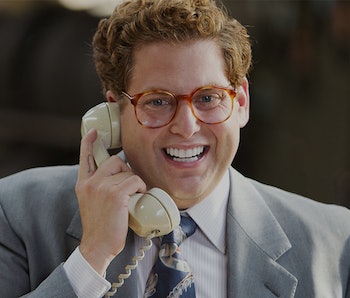 In 2008, the idea of Robert Pattinson and Jonah Hill starring in a Batman movie seemed about as far-fetched a possibility as any. The former was being introduced to the world at large via the Twilight franchise, as dubious an introduction in mass media as there has been this century. The latter was faring perhaps a bit better thanks to roles in films like Superbad and Knocked Up but was largely known as comic relief. That a broody teen vampire and a comedic actor who recited profanity as though it were poetry would go on to play the leads in one of the biggest superhero franchises in the world was ludicrous.

Yet here we are, over a decade later, and not only is Pattinson confirmed to be our next big-screen Bruce Wayne, but rumors seem to indicate that he’ll be facing off against a villain played by Hill. It seems like an odd pairing at first, but it makes more sense than you may realize. It also reveals quite a bit about the shape of director Matt Reeves’ The Batman.

While there’s an extent to which each actor will always in some way be associated with their iconic early roles (for better or worse), both Pattinson and Hill have sought to reinvent themselves as indie darlings over the last few years. Pattinson, in particular, has steered almost entirely clear of blockbuster filmmaking since Twilight. He’s instead sought out acclaimed auteurs like David Cronenberg, Claire Denis, and the Safdie Brothers and honed his skills as an actor in their films. In the wake of his performances in Good Time and High Life, any remnants of Edward Cullen seem to be shed - or at least as shed as they’ll ever be.

As such, it actually makes sense that Reeves would look to Hill to play his opposite. While the baggage Hill has worked to shed hasn’t been quite as notorious as that of a sparkly teen vampire, he undeniably established himself as a specific type of actor in his early years. That began to change in 2011 with Moneyball, Hill’s first legitimate effort in a dramatic film. Moneyball is far from devoid of comedy, but it’s a drama first and foremost. Hill shines in the film, and it garnered him his first Oscar nomination. Ever since, Hill’s appeared in a series of “serious” comedies, perhaps most notably Martin Scorsese’s The Wolf of Wall Street.

He’s also given directing a shot. His indie coming-of-age skateboarding drama mid90s proved one of 2018’s best efforts and there’s a good chance it won’t be the last time we see him take a seat in the director’s chair. While he’s still prone to being the same funny kid we grew to love way back in 2007, Hill’s turns in Maniac and Don’t Worry, He Won’t Get Far On Foot mark the work of a serious actor yearning to take on challenging material.

So what does this mean for Matt Reeves’ The Batman? Despite not knowing what role Hill will be playing, there’s still plenty to take away from the casting. Reeves has clearly got an eye for young actors looking for a challenge. As such, it feels fair to assume that his take on Batman and the world of Gotham will be unconventional. On a similar note, he’s managed to rope in two actors who have made a great effort to not take roles in blockbuster films or franchises over the last several years. Whatever script he’s working with must be compelling enough to get guys like Pattinson and Hill to step away from whatever acclaimed auteurs they would otherwise be aiming to work with.

And when it comes to Hill’s casting, the actor’s age is notable. Despite being only 35, there’s a youthful energy to many of his performances. He’s still very much able to play younger characters. So it feels safe to assume that we’ll be seeing a younger Batman up against a younger villain. Hill doesn’t have the gravelly presence that only comes with age necessary to play a Gotham City mob boss like Carmine Falcone or Sal Maroni, nor is he as traditionally strapping and handsome an actor as we’d usually see take on the role of Two-Face. Hill clearly isn’t averse to physical transformation based on some of the weight loss and hair/make-up we’ve seen him work with in other films. Whichever villain he’s playing, it feels safe to say that it won’t be a cartoonish take nor a mo-cap monster.

Until an official announcement comes there’s not much to work with in terms of interpreting the plot of Reeves’ Batman film, but his casting decisions mark the choices of a director looking to work with driven young actors who don’t shirk away from tough material. Whatever is coming, we’ve got a feeling it’s nothing like any Batman film we’ve ever seen before.