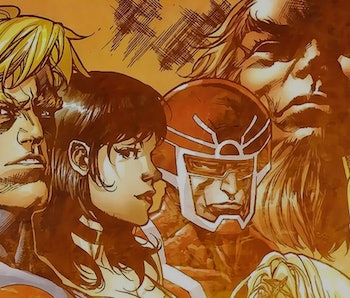 Marvel Studios’ The Eternals has only just started filming, but newly leaked set photos might be a huge spoiler about how the film begins.

Earlier this week, a Twitter account dedicated to updates about The Eternals called @eternalsupdates posted a series of set photos featuring Angelina Jolie in the leading role as the Eternal Thena. In the photos, Jolie has blonde hair with a white dress and some kind of tan belt, and she appears to be on some kind of tropical shoreline of a lake. She wades into the water and dumps the contents of a vase into the lake.

This is obviously speculation, but it definitely seems like she’s dumping a dead person’s ashes into this body of water. It could be old coffee grinds for all we know, but assuming it is ashes from someone that died, the obvious person would be her father, Zuras. This moment probably won’t be that significant to the plot of The Eternals, but it may be an early scene that sets the power dynamic between these superpowered beings. This could essentially be the moment when Thena becomes the leader of the Eternals.

Since details began to emerge about The Eternals, Jolie’s Thena has been labeled as the leader of the group, but in the comics that isn’t always the case. In Marvel Comics, Thena is part of the third generation of Eternals, and her father Zuras led them all for a time. Zuras died in Thor Volume 1, #300 during a conflict against the Celestials and Deviants.

Given that Eternals predate most of human history, it’s possible that The Eternals opens on a montage skimming through various periods of the past. Rumors about the film also indicate that it’ll focus on the ongoing war between Eternals and Deviants (similar beings akin to Thanos that are superpowered but corrupt.) Perhaps a Deviant kills Zuras, compelling Thena to become queen of the Eternals?

As of this writing, Zuras is one of the few Eternals from Marvel Comics that is not cast for the movie. Maybe he dies offscreen early in the film, and this inciting event is what catalyzes the core conflict in the story? Even if that’s not the case, Thena is dumping someone’s ashes into the water. If this happens later in the movie, then is it someone else from the cast that dies? Will Marvel pull a Game of Thrones and kill Kit Harington only to resurrect him soon afterward?

We’re still extremely early in production, and the film won’t be out for more than a year, so almost anything could happen.

The Eternals will be released in theaters November 20, 2020.