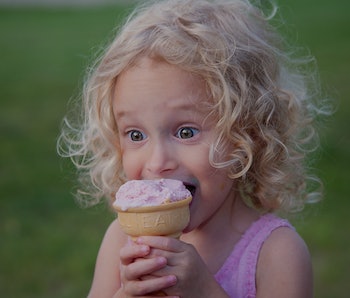 Usually when you think about how your eyes work, you think of it sort of like a camera: Things exist in the world, visual information comes in through your lens, you see it. Basically, you expect that you and the person next to you are going to see the same scene in the same way, assuming you’re both wearing your glasses and are not color-blind.

But researchers who are into this sort of thing are increasingly figuring out how the way we perceive the world is tied to whatever else is going on in our brains, especially our mood. Like an Instagram filter on your world, what you’re feeling is definitely changing what you’re seeing.

It’s not just your visual system. Upcoming research to be published in the journal Appetite showed that ice cream literally tastes more sweet to a hockey fan whose team has just won a game. Conversely, fans whose team lost tasted sour more acutely.

Asked to rank different ice cream flavors, the disappointed fans were turned off by a citrus sorbet in particular, study author Robin Dando told Smithsonian. “The salted caramel pretzel flavor they often liked whether they won or lost, but the other they weren’t so generous with. That kind of makes us wonder if this means that at times when you’re not so happy in life, you have to go for the most delicious foods.”

(The researchers suggest that this could help explain why some people turn to food for emotional comfort, eating foods that aren’t good for them when they know they shouldn’t.)

Fear can have a big affect on how you interpret the world, too.

Researchers from the University of Virginia compiled a bunch of evidence for the ways our moods affect our perception, and they argue that all of this serves to order the information coming into our brain in a way that makes us pay attention to the most important things and not waste energy on things that don’t matter.

And so all of this makes a strange sort of sense. Fear enhances your perception of things that might be threatening, which could help keep you alive. If you’re sad, you’ll seek out things that make you happy, like salted caramel pretzel ice cream — which isn’t really a problem until you find yourself drowning in a bucket of it on a lonely Saturday night. And if you’re feeling good, you’re like — hey, this citrus sorbet actually tastes pretty damn good. Which is cool, because life is pretty alright.

Your brain, as it turns out, isn’t a bunch of discrete systems operating independently. Any piece of information coming in has the potential to affect any number of different aspects of the way you think, feel, and behave in the world. It’s like if the ads you see on YouTube changed based on the photos you’re taking on your smartphone. Which, let’s be honest, is probably something YouTube is already trying to figure out how to do.

More like this
Innovation
5.13.2022 11:00 AM
These robots have one special skill that could make human chefs obsolete
By Sascha Brodsky
Innovation
5.12.2022 6:00 PM
Star Wars: A robotics expert reveals the The Mandalorian's biggest flaw
By Sarah Wells
Mind and Body
5.5.2022 1:00 PM
Does submerging an avocado in water keep it fresh? The science behind the hack
By Elana Spivack
Related Tags
Share: