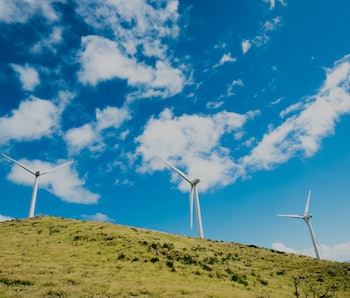 Renewable energy is rapidly growing cheaper than fossil fuels in more areas of the world — transforming the conversation around switching from environmental benefits to economic gains.

“For two-thirds of the world, renewables are cheaper than a significant amount of carbon-based energy, so it isn’t just an argument of environment, it’s now just pure economics,” Milken said.

It’s a sign of the growing sentiment around technologies like wind and solar. The World Economic Forum noted in May 2019 that the benchmark price for offshore wind by over 50 percent since 2010, onshore wind by 49 percent and solar by 84 percent. Lithium-ion batteries, critical to storing this energy to provide round-the-clock power, have dropped in price more than 75 percent since 2012.

As the United States and China join the list of countries where solar could prove cheaper than coal power, and world leaders grapple with how to reach net-zero emissions targets by 2050, the question around renewables is changing from “why” to “why not.”

The price of renewable energy is on the decline.

An MIT study in November 2018 tried to explain why solar in particular has seen such a dramatic drop. The researchers pinpointed a variety of factors: while in the early years of solar the main driver was research and development, over the past 10 years the largest factor has been the economies of scale.

There has been a dramatic boost in the use of renewables over the past decade. A United Nations report earlier this month showed that, between 2010 and 2019, the world spent $2.6 trillion on clean energy, half of which went onto solar. Renewables capacity soared from 414 gigawatts to 1,650 gigawatts. Renewables now account for 12.9 percent of global electricity.

This has resulted in real-world price declines. In March a landmark report from think tank Energy Innovation showed that the levelized costs of energy for renewables can reach $15 per megawatt-hour for wind and $28 per megawatt-hour for solar. By comparison, marginal costs for coal plants under regular usage can reach anywhere between $24 and $105 per megawatt-hour. The report suggested that, in 74 percent of cases, building new wind and solar capacity would be cheaper than maintaining the existing coal plant.

The trend has been spotted elsewhere around the world. In August, a paper in the journal Nature showed that China has reached a similar tipping point. In all 344 prefectures studied, solar energy was cheaper than buying energy from the grid. In 22 percent of cases, solar could compete with the benchmark prices of desulfurized coal.

Milken noted that Texas, the state with the lowest cost of energy, was also the one with the most wind power. The Energy Information Administration shows that use of biofuels and other forms of renewables excluding hydro has increased more than twofold between 2000 and 2018. Last year it accounted for around 11 percent of the country’s energy consumption.

“If you go to the United States a decade ago, you had the leaders testify that there would be no substitute for coal, that renewables would make up a very small part of the United States’ (energy mix),” Milken said.

As the world looks to switch to a more sustainable source of electricity, it’s a mantra that no longer stands up to scrutiny.