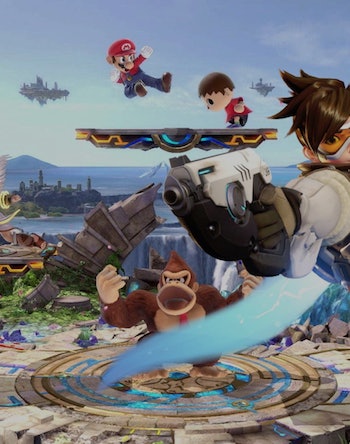 Earlier this week, a leak from late August that Overwatch would come to the Nintendo Switch proved true, and immediately fans dreamt of a world where heroes like Tracer or Winston might find their way into Nintendo’s mash-up fighting game Super Smash Bros. Ultimate.

Smash Bros. historically focused on Nintendo-owned video game characters, but there are already eight third-party character in the game after the recent addition of Banjo & Kazooie. If Nintendo and Overwatch developer Blizzard can come to an agreement about porting the team-based hero shooter over to the Switch, then it at least seems possible that Blizzard might lend one or more characters to Nintendo for inclusion in Smash.

The obvious hurdle would be in figuring out how to translate gameplay mechanics from a first-person shooter into a close-quarters brawl. Nintendo managed this with numerous characters already — like Snake, Bayonetta, Samus, and more — so doing it with one of the cartoonish heroes from Overwatch should be no problem at all, especially when Ultimate abilities in Overwatch already feel exactly like Final Smash Moves.

Assuming this partnership does result in an Overwatch character making their way over into Super Smash Bros. Ultimate, out of the current roster of 31, here are the 11 most likely candidates ranked by how well they’d fit and the overall likelihood, along with some fun assumptions about how their toolkit might function:

Smash Bros. already has a distance grapple mechanic in the form of Samus and Link’s grab move. At a distance, Samus can shoot out a sticky plasma whip that grabs enemies, and some versions of Link use his hookshot to accomplish the same. Roadhog would essentially function like a large, heavy character like King Dedede except with that same hook mechanic.

In Overwatch, his primary weapon fires either close-range in a wide spread of shrapnel or a tighter spread at a distance, both with a slow rate of fire. His regular attack in Smash could be some kind of punch, and his special could be a chargeable version of this Scrap Gun.

Zarya’s physical build feels akin to Ganondorf in Super Smash Bros.; She’s heavy and slow like Roadhog, but she takes up much less physical space. Also, like Roadhog, her standard attack could be a simple melee with her special focusing on a Particle Cannon that can either fire a short-range laser that increases in intensity or lob out a small explosive charge. Her barriers can also be replicated by copying something like Ness’ absorption barrier.

One of the select few Overwatch characters that’s melee-focused, Doomfist would be much higher on this list if he weren’t so unpopular to play in the game. It doesn’t help that in the game’s thin lore, his role is pretty minimal, doubly so because he was one of the later characters added to the roster.

Aptly named, Doomfist’s primary feature is the giant gauntlet he wears on his right hand. Within Overwatch, he does something similar to a Captain Falcon’s chargeable Falcon Punch, slamming enemies back into walls and other structures to do extra damage. But he can also use the gauntlet to launch himself into the air and slam back down. Movement-wise, he’s almost perfect for Smash. But would Nintendo pick such a minor character?

Brigitte is one of the newest characters in Overwatch, and even though she’s classified as a support healer, she’s an up close and personal physical combatant that would feel right at home in Smash. She’s essentially a squire in armor with a shield and a rocket flail.

If ported over to Smash, her primary attack could work like Zero Suit Samus’ whip, and her shield could work like Link’s passive shield, blocking basic projectiles. She’d have to lose all the healing capabilities she has in Overwatch, but she’d more than make up for it in aggressive movements that push enemies right off the stage.

Mei would obviously be best friends with the Ice Climbers, utilizing virtually all of the same ice and freezing moves. In Overwatch, Mei can gradually freeze enemies, shoot long-distance icicles at them, and even summon an ice wall. She’d fit right in! They’d just have to shrink that ice wall down to size.

Overwatch’s boyscout is a hulking brute with a giant shield and mecha armor. Oh, and he’s got a giant, rocket-powered hammer. Reinhardt’s hammer might function like King Dedede’s wooden one in Smash combat, and his flaming projectile Rocket Strike could be a modified version of Ness’ PK Fire. Plus, several Smash characters already have some kind of charge mechanic.

Given his size and power, the real risk with Reinhardt in Smash would be making him overpowered. To mitigate that, he’d either have to be the heaviest and slowest character ever or exist in Smash outside of his armor.

Calling someone a “Hanzo main” in Overwatch (stubbornly refusing to play anyone but this ninja-archer) is a grave insult in the gaming world, but Hanzo’s infamy has also made him a recognizable face and name, making his inclusion in Smash that much more likely.

Between the various versions of Link and Pit, archery mechanics are already a firm part of Smash Bros., so all you’d really need for Hanzo would be to spruce up his close-range combat with some punches and kicks.

When you buy a copy of Overwatch, it’s Tracer on the cover. That disc you actually put in your console? She’s on there too. She’s the face of Overwatch, a cheery British woman with a cool story about getting unstuck in time, giving her the ability to teleport and reverse time in short spurts.

These mechanics could be trouble for Super Smash Bros., but if Blizzard can make it work in a first-person shooter, Nintendo can make it work in a fighting game. Tracer would have to be small, light, and fast — like Sheik. Her major benefit would be a teleporting movement like Pikachu’s Quick Attack. To mitigate the ranged nature of her Pulse Pistols, maybe they’re her special attack and they momentarily prevent her from moving?

Whenever you log into Overwatch, you have to listen to a few seconds of the opening cinematic: A giant talking gorilla wearing glasses fumbles with a camera and begins recording a message to the world’s heroes that it’s time to get back together. It’s goofy, it’s charming, and it’s what Overwatch is all about.

Winston may not be the best Overwatch characters to play as, but his charm makes him a prime candidate. If any character deserves to make it into Super Smash Bros. Ultimate, it’s him. But there are important reasons why he doesn’t rank higher on this list. Obviously, many aspects of Winston would function like Donkey Kong in Smash, expect Winston has a short-range electric Tesla Cannon and a Jump Pack that could serve as his special and recovery moves.

Genji is an incredibly popular Overwatch character who’s unlike any other in that his entire toolkit involves wielding a sword in a gunfight as a cyborg ninja. He can reflect enemy gunfire, dart forward with a long-distance slash, and throw shurikens. Between Mario’s Cape, Fox McCloud’s Fox Illusion, and Sheik’s Needle Storm, all of these abilities are already in Smash.

Given his popularity and the easy way he’d fit in, it’s likely he’d be a prime candidate.

An eSports legend turned movie star who pilots a mecha into battle as one of Overwatch’s tank characters, D.Va is already reminiscent of the classic versions of Samus from Super Smash Bros. Brawl. When she takes enough damage, her mech is destroyed. She becomes vulnerable and gets an entirely different moveset, but if she stays alive long enough, she can summon another.

D.Va might be lower on this list if it weren’t for a supposed 4chan leak claiming Nintendo would announce a controversial “female character” that would “disappoint and confuse” fans on September 12.

D.Va definitely fits the bill, and she’s so popular that her personal sidearm was made into a Nerf blaster anyone can buy. She’s also often praised as a positive female role model, and her abilities strike a perfect balance of new and unique to Smash while also seeming like they’d fit within the existing framework.