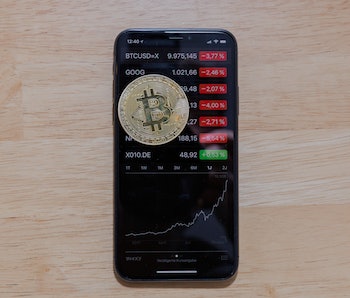 Is cryptocurrency coming to the iPhone? While Apple’s smartphone supports apps that provide access to wallets and exchanges, recent comments from an executive have suggested the company could offer deeper integration.

Apple has started developing deeper integration for payments on its platforms, starting in 2014 when it launched Apple Pay in the United States. Bailey noted that at the time of launch, just three percent of American stores accepted contactless payments. Today, that figure rests at around 70 percent.

Beyond helping to drive adoption through widespread advertising and high brand recognition, Apple also changed mobile payments through another of its well-known talents. Apple Pay is simple, integrated deep between hardware and software, enabling users to make payments using the provided fingerprint scanner and a wave of their phone. User experience is a key focus of the company, from its “three steps to get online” iMac ads from 2001 to the iPhone’s multi-touch interface that ditched complex smartphone buttons.

This combination of strong brand recognition and straightforward user experiences is why Apple watching cryptocurrency could mean big things for the space.

iPhone and Cryptocurrency: A Match Made in Heaven?

The bitcoin white paper, published by Satoshi Nakamoto in 2008, laid the foundations for a new form of peer-to-peer electronic money. The paper described how a complex network of computers could add transactions to a “blockchain” and create a decentralized currency.

The paper was relatively thin, however, on how to make this new system as seamless and user-friendly as possible. Third-party exchanges and wallets aimed to fill in the gaps to varying successes. During the December 2017 surge in bitcoin’s price, user-friendly wallet and exchange Coinbase reported around 12 million users.

Despite these highs, cryptocurrency can be difficult to use. Apple Pay is seamless enough that London Underground users can use it to open the barriers in a split second during their morning commute. Spending cryptocurrency in stores tends to involve scanning a QR code with a smartphone and hoping for the best.

Two British travelers that spoke to Inverse in April 2018 expressed frustration at trying to find somewhere to spend bitcoin, finding just one ATM during a six-month tour of the United States. Inverse’s hands-on trial in November 2018 of the pub BrewDog London’s bitcoin payment process ended in frustration due to conflicting technology standards. Other visitors to the same pub also expressed frustration, with one describing the process as “a bit clunky.” Industry figures have recognized the need to make cryptocurrency easier to use.

“As an industry, we need to bridge the gap between the early adopters and their needs and the majority mainstream audience,” Micah Winkelspecht, founder and CEO of blockchain startup Gem, said in an April 2018 statement. “We need to deliver a better user experience.”

In June 2019, Facebook made a big move to try and fix these issues. Libra, the name for the company’s proposed alternative cryptocurrency, is expected to collaborate with existing financial systems to draw on their expertise. Perhaps most important of all is its integration with Facebook’s apps, offering a simple experience through an interface familiar to billions of people.

Apple could help expand on this further. Beyond Apple Pay, the company has broadened its payment offerings with peer-to-peer money transfer system Apple Cash, where users can send each other money through the iPhone’s built-in apps. This year the company launched Apple Card, a credit card that easily tracks payments and breaks down spending by category.

Bailey notes that adoption is only set to increase from here. A number of transit systems in the United States are expected to move to mobile in the next two to four years, which Bailey describes as a “snowball effect.”

As Apple seeks to expand its payments products out further, the company could bring its user experience talents to the cryptocurrency space.

The author of this story holds a stake in bitcoin and Ethereum.

More like this
Innovation
5.23.2022 9:00 PM
How a genetically-engineered tomato could help solve a global health crisis
By Claire Cameron
Innovation
5.24.2022 1:33 PM
50 years ago, the U.S. and U.S.S.R. joined forces to ensure astronauts could survive in space
By Allie Hutchison
Innovation
5.21.2022 2:30 PM
46 years ago, one video game innovation modernized the industry — and traumatized a generation of gamers
By Zack Kotzer
Related Tags
Share: