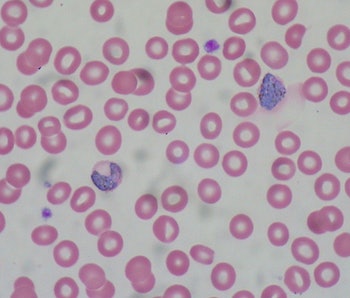 A new technology developed at Texas A&M could make malaria detection cheaper, faster and easier in parts of the world with limited access to expensive lab facilities and expert technicians.

Researcher Casey Pirnstill told Inverse that he wanted to combine his interest in 3-D printing with his background in the polarization of light (yes, like your sunglasses).

He found research to support the idea that using polarized light to look at blood smears can improve detection of malaria. It works because the polarization highlights hemozoin, a waste product produced by the parasite that causes malaria.

“We started to look into, what could we do where we could make some low-cost attachment that can fill the need for these areas where they don’t have the money to buy the high-end equipment?” says Pirnstill.

What he came up with is a 40-100x microscope that clips onto a cellphone. A slide with a blood smear is inserted into the device, which includes an LED light source and a polarized filter. The camera takes a picture, and the photo shows the presence or absence of malaria.

The problem with traditional diagnostics is that many countries where malaria is rampant don’t have enough labs and microscopy experts to deal with the volume of tests needed, says Pirnstill. And lab diagnoses take time, with technicians manually counting malaria parasites and blood cells. As a result, some people are not getting treated immediately, especially if they have to travel from home to a testing facility.

Because of the lack of access to lab testing, many health-care providers rely on rapid diagnostic tests, which are the equivalent of a pregnancy test for parasites. They are not always reliable and can lead to misdiagnosis and overtreatment, he says.

Giving medicine to those who don’t need it is causing drug-resistant strains of malaria to develop, says Pirnstill. He hopes his device will change that, putting immediate and accurate diagnoses right in the communities affected by malaria.

The device could be used by a nurse or other health outreach workers. The team is working on an app that would automatically interpret the camera image and make the diagnosis, taking the guess work out of it. The original photos would be saved in case further interpretation by a doctor is required.

Now, Pirstill is working to develop a rugged, field-ready version of the device for testing in Rwanda and perhaps elsewhere in 2016. The hope is to get it into the hands of people already doing malaria diagnoses in communities and get their feedback for improvements. From there, more research will likely be required to prove that this technology is better than the current standard, says Pirnstill.

Here’s a video of Pirnstill’s research advisor explaining the technology: