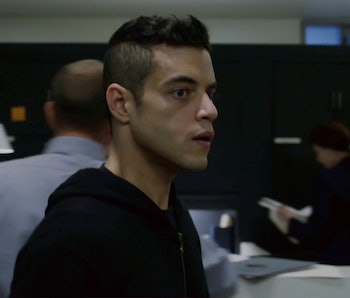 Corban Goble: So, yeah, last night’s Mr. Robot finale threw a lot of shit into the fan. Angela ascending the corporate ladder and getting buddy-buddy with Phillip Price. Elliot and his family, reunited in an empty Times Square. Tyrell’s wife gaming Elliot; what was she going for there, and why did she eventually give herself up? Whiterose appearing with Price, dressed as a man, at a Long Island Gatsby mansion. Who the fuck in this show is real? Who the fuck is imaginary, and does it even matter? What happens next here?

David Turner: In a way, in a show where anything is possible, it’s probably likely things are less fucked up than I’d like dream in a nonsense, nothing is real, #nothingmatters version of the show. Still, the idea that all season we’ve seen multiple characters interact with Elliot (Mr. Robot, his mother and his younger self) pop in and out implies to me that other people in this world cannot be real.

Is Darlene real? Is fsociety real? I want to say no, as they appear so isolated from the real world that the idea that all of this is Elliot’s doing wouldn’t be too unbelievable. But perhaps I’m a bit too caught up in the always shifting head of the lead, as I also wonder who is “You” he keep talking too? Obviously it’s us the viewer, but that breaking of the fourth wall is still oddly undertapped. And where the fuck is Tyrell?

Winston Cook-Wilson: First of all, just want to say that I loved the episode. Loved that it was sort of anticlimactic, and just opened it up towards more cosmic possibilities than delivered any big action. It wasn’t trite — and I think it was clever to put the moment of the big hack off-screen. That leaves us wondering though — this was the big thing I was unsure about: did Eliot actually execute the hack? Or are Philip and White Rose (thanks, superhero-movie-like post-credits easter egg) involved with this? Is that why Philip isn’t worried? Did they kill Tyrell?

One thing I definitely think is possible is that we will never explicitly learn where Tyrell is. The show loves to skip around, and fuck with our sense of temporality (as well as Eliot, obviously, who more and more seems to be losing time). I would predict that the show will leap significantly forward in time at the outset of Season 2, or else begin in some kind of flashback/Tony-Soprano-in-a-coma-like dream state. I bet Tyrell will be a distant memory at that time — a non-player — and that Esmail will get off a bit on dangling that one over our heads. I think we can only expect Eliot to get more lost in his head. Who’s at the door? Someone who’s going to fuck up him up even more.

I actually think a lot more is “real” here than it might seem — it’s possible that Tyrell is somehow an extension of Eliot but given the fact that he is usually filmed independently (he’s basically a separate storyline) and has his strong-willed wife (who may in fact be pulling the strings), I think he’s just as he appears to be. Unless this is some Berenst#in Bears multiverse shit and Tyrell’s storyline is going on in an alternate universe where Tyrell is actually Eliot, and they cross paths in some nexus between the two dimensions at a couple of points.

People were hyping the final post credits scene, and I like how eerie and fucked up it was. It’s like the scene in “Sleep No More” when everyone is sitting at the table and this chaos is completely welling around them; the fact that Whiterose and Price seemingly go back and have some kind of business relationship was a much-appreciated hat-tip to the core philosophy of Nothing Matters. The company is named Evil Corp, for God’s sake, but are they even the evil ones?

Naturally, I think we’re all curious how they negotiate this high-wire act — there’s lots of interesting threads still sticking out — especially with respect to Elliot’s issues, which at first appeared to be sort of technical and chemical but now are rendered as full-blown emotional wounds. There’s definitely some cartoon-y stuff happening in the finale — “I’LL TRY THE PRADAS NEXT!” — but I wonder what kinds of things a rewatch will lend to this show. For instance, the scene where Mr. Robot comes over to Romero’s super-pot operation and busts his ass, or just the fact that everyone in fsociety comes together to represent a beautiful tapestry of backgrounds and lifestyles… what can we learn there? Everyone is going gaga over the shows cinematography; what will a closer watch reveal?

DT: Yeah, I’m excited to rewatch the show at some point because so many of the late season reveals just throw so many wrenches into what we know about the show. Also I read in an interview that the Ashley Madison line was in the original script and not just added to be timely, which only might be the freakiest thing about this show if it were to have air at it’s original time last week. The right now is just tapped into a stream of our world that even it cannot fully comprehend in a way.