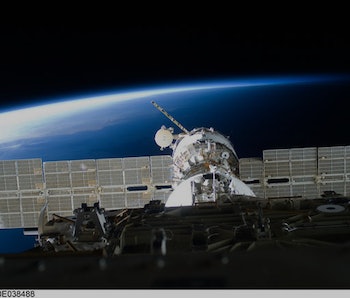 The space race used to be a one-on-one affair. America and the Soviet Union jockeyed for control of the final frontier. Then the Soviet Union collapsed and the rest of the world got real interested in afterburners.

Today, more than 70 countries purport to have a functional space program. Though only a select few nations have independent launch capabilities, data shows why even developing nations are eager to invest: Satellite imagery helps decision makers allocate limited funds. No wonder then that, while the United States cuts down on its space budget, other countries are looking up.

Here are the unexpected countries running fairly functional space programs. They’ve got some problems at home, but they’re doing fine at altitude.

Malaysia’s interest in space stems from the establishment of a Malaysian Center for Space Sensing in 1988. The country of almost 30 million has a space agency, Angkasa, which partnered with Russia to train a Malaysian for travel to the International Space Station. That goal was achieved to some fanfare in 2007 when Sheikh Muszaphar Shukor reached outer orbit.

But most of Malaysia’s space ambitions depend on collaboration with the United States and other countries involved in the Asian space race. Malaysia’s biggest independent success to date: putting a microsatellite carried by a Russian Dnepr rocket into orbit in 2008.

What’s remarkable about Malaysia’s program is that it is flourishing — to a degree — even as the country remains incredibly tense. Freedom House slots Malaysia squarely in the “Partly Free” category while Human Rights Watch is less forgiving, citing the Muslim government’s efforts to try LGBT issues in Sharia law courts. Political opponents of the autocratic ruling party were recently given a five-year sentence, and a “sedition act” passed in 2015 has been widely criticized as an effort to silence dissenters and critics of government.

Egypt’s National Authority for Remote Sensing and Space Science was established in 1971 with help from the U.S. government and focuses on Egypt’s extant satellite program and data collection for Earth sciences, mineral resources, and wastewater treatment. Egypt launched its first satellite in 2007, with help from Ukraine. Recently, the country announced that it plans to launch a second satellite and aggressively pursue the creation of an African Space Station to compete with the International Space Station (ISS). Critics say that the budget and engineering know-how to complete the initiative remain well beyond Egypt’s reach.

Whether or not Egyptian scientists have the resources to realize their ambitions will have everything to do with the political climate in a country that has seen profound political upheaval in recent years. Egypt is widely viewed as backsliding post-Arab Spring and observers have expressed fear that chaos is the new normal.

Indonesia participates in Asia’s wider space race, having launched a successful satellite from India in 2007. The latter has been a stout ally of Indonesia; the two partnered to provide ground tracking of Indian satellites in the late aughts. Indonesia plans to launch another from India this September.

Its program, the National Institute for Aeronautics and Space (or LAPAN), has sought to use Indonesia’s 17,000-plus islands as a bargaining chip in negotiations, and hopes to partner with Russia to provide Biak Island as a launch site for Roscosmos.

Pakistan’s space program, called the Space and Upper Atmosphere Research Commission, or Suparco, has a history of unfulfilled promises, mismanagement, and misallocation of its roughly $6 billion dollar budget. Despite generous support from China and encouraging returns from some of its early initiatives — it successfully launched a satellite from a Chinese air base in 1990 — Suparco’s record is dubious at best. While Suparco stands little chance of achieving its goals unless the ruling regime stabilizes, China recently doubled down on its efforts at a partnership with the Pakistani space agency.

North Korea’s record as a domestic and international belligerent is unblemished by the slightest decency. Power, wealth, and resources continue to be concentrated in a small sector of the ruling class, while drought, famine, and treatable disease ravage the population. To say that the space program seems like an indulgence — a plaything for a despot — is to put it mildly.

But it’s not much of a toy. North Korea’s KCST has been an abject failure. Attempts at four separate launches all ended in disaster and even the supposedly successful launch of a satellite in 2012 was rumored to have been a failure. Nevertheless, North Korea’s space program recently announced that it will try again by launching a rocket to celebrate the 70th anniversary of the rise of the Korean Workers Party.

The Persian Republic is among the few countries with launch capability. Iran put an unmanned spacecraft into orbit in 2009 and has done so several times since, though two attempts in 2012 failed. Iran has also launched two primates into orbit (both were reported to have survived their trip). Despite a bizarre and apparently false news item that Iran had shut down its space program, the ISA remains alive and in expanded development. Time will tell what comes of the agency if sanctions are lifted.

The moneyed Middle Eastern nation’s space program has signed an agreement to partner with Russia in the latter’s efforts to build another International Space Station by 2023. This agreement also allowed Saudi Arabia to launch its 13th satellite from the Russian rocket Dnepr at a base in Yasny, in Russia.

More like this
Science
Jan. 12, 2023
This oil giant accurately predicted global warming — and still lied about it
By Tara Yarlagadda
Science
Jan. 13, 2023
Russian Soyuz capsule sprung a coolant leak in space last — here’s how serious that could be
By Doris Elín Urrutia
Science
Jan. 12, 2023
Soyuz rescue plan and more: Understand the world through 8 images
By Robin Bea
Related Tags
Share: