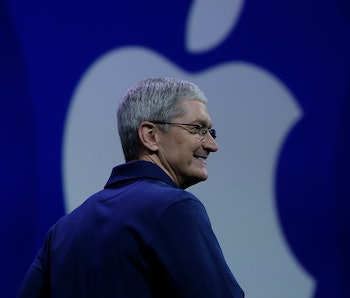 Apple is planning a big reveal next Wednesday, September 9. Teased with “Hey Siri, give us a hint,” Apple will unveil two new iPhones, a revamped Apple TV, new bands for the Apple Watch, and, potentially, new iPads, according to 9to5Mac’s latest rumors. The new tablets (which may be saved for an October event) are the “iPad Pro” and the iPad mini 4. New Apple products are all well and good, but at this point, it seems like they’re making it up as they go.

The iPad Pro is planned to be the size of a MacBook — that’s big. Contrast that with the Apple Watch, which is small. I haven’t tried one, but it looks like only someone with literal styluses for fingers could tap that screen effectively. So I guess once you’re tired of squinting at your wrist, you turn to your mega-tablet for some extreme Candy Crush?

Apple certainly makes quality products. It just seems like they’re hung up on sizing: iPads come in three varieties; iPhones are getting bigger; MacBooks and iPods have always had several options. Choices are good, but some seem less necessary than others (like that gigantic iPad). Big or small, Apple, it’s not the size that matters. You’re still great on the inside.