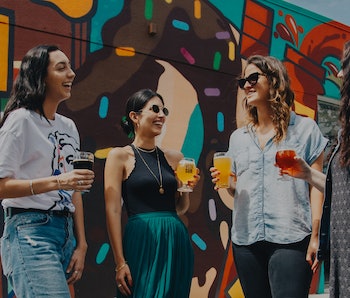 Drinking alcohol is associated with aggressive behavior, accidents, and ill health. Yet many of us choose to drink socially. This may reflect alcohol’s actions on specific brain circuits, which make us feel euphoric and less anxious. Alcohol may also make us more empathic and cause us to see other people as more attractive. But why do these reactions occur and are the positive effects of alcohol expressed towards everybody we interact with?

Alcohol is a drug, one of the three most commonly used in the world, along with nicotine and caffeine. When we drink, the alcohol binds to a specific type of receptor in the brain and boosts the activity of a natural brain chemical called GABA. The effect the alcohol has on us depends in large part on the dose and the location of these GABA receptors within the brain.

See also: What Happens When You Quit Casual Drinking? Scientists Reveal the Effects

Early on in a drinking session, the alcohol acts on GABA systems to boost the levels of dopamine, the brain’s reward chemical. This gives a sense of well-being and a sense of mild euphoria. Alcohol also acts on GABA receptors to impair the activity of the brain circuits that make us feel anxious and, at higher doses, alcohol inactivates a second set of brain circuits that control fear. So threatening stimuli no longer seem quite so scary. Alcohol also compromises our ability to compute risk so that situations we would normally shy away from may now seem quite inviting.

All of this points to alcohol as a facilitator of social interactions. As well as making us more empathic, laboratory studies have also shown that drinking alcohol can make us trust others more and make us temporarily more generous.

On the other hand, heavy drinking is associated with violent behavior. This situation, however, is complex. Laboratory studies have shown that alcohol increases aggression. For example, it increases the willingness with which individuals will administer electric shocks to others. However, this effect seems to be largely restricted to those who are intrinsically aggressive in the first instance.

Equally, alcohol can corrupt our ability to understand the intentions of others. The brain contains specific circuits, which connect parts of the prefrontal cortex, amygdala, and temporal parietal junction, that handle our social cognitive abilities. So our ability to understand somebody else’s mental perspective and their motivations for acting in a certain way become unreliable.

Very big doses of alcohol can leave the functioning of these circuits so compromised that individuals can appear to be as impaired as patients with some forms of dementia. This is quite a disturbing thought given the number of people who end up in this state in city centers at the end of a good night out.

Alcohol also impedes our ability to accurately interpret emotional expressions in faces. As we drink, we have a tendency to erroneously assume that some facial expressions of negative emotions are happy, and we find it particularly difficult to identify sad and angry faces. This leaves us prone to making embarrassing social errors.

One important, but often overlooked, aspect of alcohol’s effect on social functioning relates to how we perceive members of our in and out-groups. Alcohol appears to encourage us to bond to members of our in-groups. However, this may come at the cost of the way we treat people outside of these groups. Similarly, alcohol makes members of our ethnic in-group appear more attractive, but this effect does not extend to members of other ethnic groups.

It must be emphasized that the effects described so far are potentially reversible once the drinker has sobered up. However, chronic heavy drinking can lead to brain damage and irreversible cognitive impairments, especially poor memory function and psychiatric problems, including depression, psychoses, anxiety, and suicide.

So overall, alcohol may be a friend, and indeed make us friendlier, but only to a select group of people – and they may not always reciprocate.

This article was originally published on The Conversation by Ian Mitchell. Read the original article here.

More like this
Mind and Body
Jan. 24, 2023
Is alcohol bad for your health? Here's what the science actually says
By Katie MacBride
Mind and Body
Jan. 30, 2023
Swapping Cigarettes for Vaping May Help You Quit — but There’s a Catch
By Elana Spivack
Mind and Body
Feb. 5, 2023
How Your Diet Could Help (or Hurt) Your Aging Brain
By The Conversation and Sara N. Burke
LEARN SOMETHING NEW EVERY DAY.
Related Tags
Share: