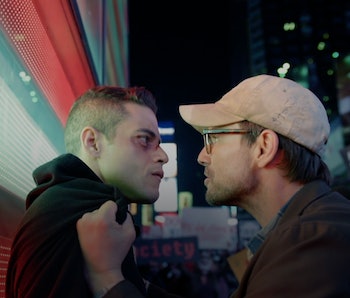 Last week the season finale to USA Network’s hacker series Mr. Robot was pulled off the air because it was reported to include a scene similar to the tragic, real-life murders of two local Virginia television workers that occurred on live TV. The controversial episode in question is now set to air tonight, unedited.

In a series of reply tweets, Grantland writer Andy Greenwald confirms that the network hasn’t changed or censored the scene in the finale from the preview version he saw last week.

He also recommends viewers not tune in tonight to extend their DVR time, because the finale will include a Marvel-esque post credits sequence that will possibly lead into season two.

At the time of the shooting, USA Networks issued a statement saying, “Out of respect to the victims, their families and colleagues, and our viewers, we are postponing tonight’s episode. Our thoughts go out to all those affected during this difficult time.” Apparently their reservations did not change the scene in question.

There hasn’t been an official statement from USA, who could still air an edited episode with the scene in question removed, but Greenwald seems to think it will air unchanged.

See for yourself when the season finale of Mr. Robot airs tonight on USA at 8 p.m. EST.