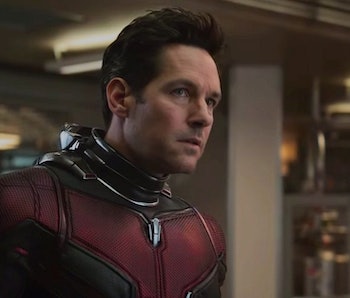 The Avengers traveled across space and time in Endgame to retrieve the Infinity Stones, but that mostly meant revisiting some of the most iconic moments in Marvel movie history (and Thor 2). However, one eagle-eyed fan may have spotted a subtle detail in Avengers: Endgame that could have changed the movie’s plot significantly by giving Thor and Rocket a different route to reclaiming the Reality Stone.

As noted by redditor u/kobikwahbz, when evil Nebula from the past uses the Avengers’ time machine to bring past-Thanos into the present, we get a brief glimpse at the device’s control panel. On the right side of the display, you can see several coordinates that someone previously typed in, including dates you’d expect to see like 2012 (the Battle of New York), but there’s also a huge outlier: 2988.

Before you get too excited about the possibility for a Marvel movie set in the distant (post-apocalyptic?) future, we should point out that this Avengers: Endgame Easter egg actually seems to be referencing the year 2988 B.C. It’s tough to read, but if you look at the smaller buttons to the right of each date you can see that the other two are toggled to one setting while 2988 is toggled to another, which seems like a pretty clear placement for a B.C./A.D. setting.

Even so, the year 2988 B.C. in the Marvel Cinematic Universe isn’t as random as you might think. That’s actually the date of the First Battle of Svartalfheim, a key moment in MCU history that would have also provided an opportunity to collect the Reality Stone.

The First Battle of Svartalfheim was an epic clash between Asgard and the Dark Elves, who were attempting to use the Aether (which contained the Reality Stone) to destroy the Nine Realms and all life within them. There were tons of casualties on both sides and the conflict was ultimately unresolved, leading directly to the events of Dark World.

The Asgardian army was led by Odin’s father, Bor, who used the Bifrost to warp the Aether back to Asgard. Meanwhile, the Dark Elf leader Malekith sacrificed his own people to escape. You can watch a short scene of the First Battle of Svartalfheim in this flashback clip from Dark World.

It seems that at some point, Marvel considered sending Thor and Rocket far back in time to this battle to retrieve the Aether (either that or one of the Avengers actually considered it in the movie). Regardless, the date’s inclusion in Endgame is an interesting look behind the curtain at a part of the movie that maybe almost happened.

Would Endgame be even better with a return to the First Battle of Svartalfheim? It’s tough to say. One the one hand, it would have been pretty awesome to see that battle again from a different perspective. It’s definitely a more exciting moment in MCU history than the scene we got back on Asgard, and we’d love to learn more about Thor’s grandfather, Bor.

Then again, we doubt grandpa could have provided the emotional support that Thor’s mother delivered just when he needed it most. Plus, by returning to Asgard, the God of Thunder was able to retrieve Mjölnir, and we’re not so sure his hammer was present at that ancient battle.

Still, we’d love to see Thor and Rocket taking down Dark Elves back in 2988 B.C. So Marvel, if you have any unused footage or even some storyboards, please do the right thing and release them.

Avengers: Endgame is available now for digital download and on Blu-ray.