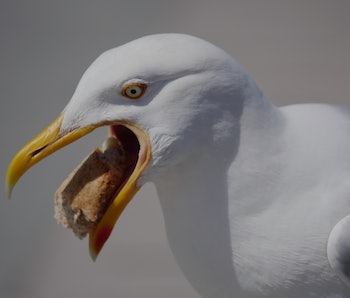 Gulls, popularly known as seagulls, are out here doing whatever they want. They are stealing lobster rolls in Maine. They are stealing miniature chihuahuas in the British town of Paignton. They are stealing baby seals’ eyeballs in Namibia. They are walking into convenience stores and walking out with a bag of chips. In New Jersey, a beach town has spent $65,000 on a team of hawks, falcons, and owls trained to get gulls away from ice cream cones.

On Tuesday, scientists from the University of Exeter report in the journal Biology Letters that they have devised a cheaper way to stop gull madness. Simply staring at seagulls, the team observes, can help you keep your beach-side treats to yourself.

The study took place in the coastal towns of Cornwall, a county in the United Kingdom that includes hundreds of sandy beaches. In each town, the researchers placed a bag of french fries (“chips”) on the ground and timed how long it took herring gulls to approach the fries when someone was either watching them or looking away. The team wanted to include 74 gull study participants, but the majority of the birds flew away or were uninterested in approaching.

In the end, the findings included 19 gulls that completed both the “looking at” and “looking away” tests. The researchers found that, on average, gulls took 21 seconds longer to approach food while a human was staring at them. You can watch the difference in their behaviors below:

In the second approach below, the researcher and the gull have a stare-down. A man even walks into frame before realizing that something is definitely going down. At the end of the staring match, the gull doesn’t exactly bail, but it stands begrudgingly to the side.

“Gulls are often seen as aggressive and willing to take food from humans, so it was interesting to find that most wouldn’t even come near during our tests,” lead author and University of Exeter postdoctoral researcher Madeleine Goumas, Ph.D., said.

“We didn’t examine why individual gulls were so different — it might be because of differences in ‘personality’ and some might have had positive experiences of being fed by humans in the past — but it seems that a couple of very bold gulls might ruin the reputation of the rest.”

Gulls are both scavengers and predators, and the conflict between gulls and humans is an ongoing source of seaside tension. In Cornwall, some citizens place the blame on people purposefully feeding the gulls, and across England, people have faulted the availability of food in the trash. In a conversation with The Guardian after that chihuahua was, University of London ecophysiologist Steve Portugal explained the situation has less to do with gulls becoming more aggressive and more to do with the fact that “they’re coming into contact with us more.”

“Gulls have shifted their distribution and behaviors away from traditional nesting sites, which would have been cliffs and quite isolated areas, and started living in more urban areas because we make it easy for them,” Portugal says.

Gulls also live up to 30 years, and they typically don’t distinguish between food that is given and food that is there for them to take. This new study suggests that at least some gulls are capable of responding to subtle behavioral cues from humans, indicating that “increased vigilance by humans may reduce food-snatching behavior.” The behavioral differences among individual gulls still matter when it comes down to results, but it’s worth it to try to stare down a gull anyway the next time it starts eyeing your snack.

Human-wildlife conflict is one of the greatest threats to species populations worldwide. One species facing national declines in the UK is the herring gull (Larus argentatus), despite an increase in numbers in urban areas. Gulls in urban areas are often considered a nuisance due to behaviors such as food-snatching. Whether urban gull feeding behavior is influenced by human behavioral cues, such as gaze direction, remains unknown. We therefore measured the approach times of herring gulls to a food source placed in close proximity to an experimenter who either looked directly at the gull or looked away. We found that only 26% of targeted gulls would touch the food, suggesting that food-snatching is likely to be conducted by a minority of individuals. When gulls did touch the food, they took significantly longer to approach when the experimenter’s gaze was directed towards them compared to directed away. However, inter-individual behavior varied greatly, with some gulls approaching similarly quickly in both treatments while others approached much more slowly when the experimenter was looking at them. These results indicate that reducing human-herring gull conflict may be possible through small changes in human behavior, but will require consideration of behavioral differences between individual gulls.

More like this
Science
5.15.2022 11:30 AM
Octopus facts: 5 incredible tidbits you didn't know about the cephalopod
By The Conversation, Erin Spencer and Yannis Papastamatiou
Culture
5.8.2022 7:00 PM
You get less sleep than a chimp — and there's an evolutionary reason why
By Elizabeth Preston and Knowable Magazine
Science
5.13.2022 3:01 PM
Can restaurant menus help diners choose climate-friendly meals?
By Tara Yarlagadda
Related Tags
Share: