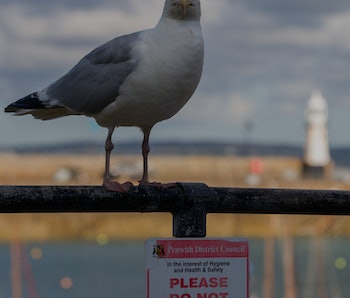 In the latest dispatch on the nature-is-a-monsoon-of-chaos-and-hostility beat, seagulls have started eating baby seals’ eyeballs.

A 15-year study of gulls in Namibia’s coastal Dorob National Park logged about 500 instances of seagulls tearing the eyes out of newborn Cape fur seals to snack on, according to research published this month in the African Journal of Marine Science.

It’s assumed that the gulls started this gruesome hunting method because the seal population boomed and there were just more of them to eat.

“It is not a pleasant behavior to observe, as the seals completely freak out and make a lot of noise,” researcher Austin Gallagher told National Geographic, presumably declining further comment on what he sees when he closes his eyes at night after 15 years of watching this horror show.

More like this
Entertainment
Sep. 13, 2022
With Pearl, A24 perfects its first horror franchise
By Andy Crump
Culture
Sep. 18, 2022
You need to watch the sexiest sci-fi thriller of all time on Amazon Prime ASAP
By Andy Crump
Entertainment
Sep. 21, 2022
You need to watch DC’s most underrated movie of all time on Netflix ASAP
By Eric Francisco
Share: