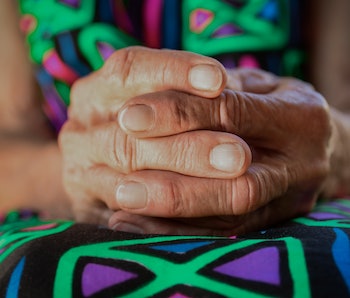 Aging is such a complex process in the body and brain it seems impossible that a technique involving daily ear stimulation — known as “tickle therapy” — might be able to fight it. But a team at the University of Leeds argues that it can combat invisible, aging-related changes that take a toll on health and happiness.

The excitement about Elon Musk’s Neuralink has gotten many people used to the idea that implantable devices might be able to unlock new potential in our brains. But the new paper, published Tuesday in Aging, shows that brain stimulation conducted through the ear — no surgery required — may be enough to make a big impact.

"We believe these results are just the tip of the iceberg.”

Using a small electrical device that fits over the ear, they showed that “tickles” that stimulate the brain’s vagus nerve can help improve mood, sleep, and “rebalance” two branches of the body’s nervous system that get thrown out of whack over time. The vagus nerve — which runs from the brain, through the face and down into the neck — is most famous for its control over the body’s parasympathetic nervous system, which is where it seems to hold the most promise for aging.

Lead study author Beatrice Bretherton, Ph.D., a research fellow at the University of Leeds, says the ear allows scientists to access the vagus nerve without having to perform surgery.

“The ear is like a gateway through which we can tinker with the body’s metabolic balance, without the need for medication or invasive procedures,” she said on Tuesday.

What Happens During “Tickle Therapy?”

There are already some vagus nerve stimulation devices available. Some are implanted into the neck and are intended to treat conditions like epilepsy, and there’s one FDA-approved non-implantable device that treats cluster headaches.

This team works with a non-implantable device that uses a technique called transcutaneous vagal nerve stimulation (tVNS). Fitting over the lower portion of the ear, it delivers small amounts of electric stimulation to the vagus nerve, the longest of the cranial nerves.

The sensation feels a little bit like a tickle, so it’s gained popularity as “tickle therapy.”

Over three experiments, Bretherton and her team exposed healthy adults over 55 years old to both single “tickling” sessions or two-week-long, daily sessions that last 15 minutes. Over the extended two-week period in particular, she noted big impacts on how her participants felt. They reported having more energy and vigor, noting improved tension levels and feelings of depression.

These findings were significant enough on their own, but the participants also reported another effect of their daily tickle session: Their sleep had improved as well.

“Indeed, participants who found that falling asleep took a long time and was difficult, had low sleep quality and had difficulties waking up in the morning, showed great improvements following two weeks of daily tVNS,” the authors write.

Taken together, these improvements do seem to paint a promising picture for tickle therapy. But its real worth, according to these scientists, lies in how it works.

The vagus nerve’s control over the parasympathetic nervous system seems to be key to its role in aging.

The sympathetic system, also known as the “flight or fight” response, is usually activated in times of stress, helping to increase heart rate and release stress hormones that get the body ready to flee. By comparison, the parasympathetic nervous system, which is controlled by the vagus nerve, takes things down a notch: it’s sometimes called the “rest and digest” response because it stimulates the gastrointestinal tract.

The natural balance between these two branches of the nervous system gets thrown out of balance with age, the team writes. Aging, they explain, is associated with increases in stressful sympathetic activity and decreases in chill parasympathetic activity, which can be harmful for heart and gut function but also impact emotional health.

They hope that by stimulating the vagus nerve through tickle therapy, we might be able restore this balance and in doing so, improve mood and stave off other effects on the heart from lopsided activity.

Importantly, not everyone in the paper was actually a “responder” to tickling. In the second experiment, there were 16 people who responded to the treatment and 32 who didn’t. But for those who are “responders,” Bretherton is optimistic that her daily tickle therapy routine has powerful potential, some of which is yet to be discovered. “Rebalancing” seems to just be the start.

Ageing is associated with attenuated autonomic function. Transcutaneous vagal nerve stimulation (tVNS) improved autonomic function in healthy young participants. We therefore investigated the effects of a single session of tVNS (studies 1 and 2) and tVNS administered daily for two weeks (study 3) in volunteers aged ≥ 55 years. tVNS was performed using modified surface electrodes on the tragus and connected to a transcutaneous electrical nerve stimulation (TENS) machine. Study 1: participants (n=14) received a single session of tVNS and sham. Study 2: all participants (n=51) underwent a single session of tVNS. Study 3: participants (n=29) received daily tVNS for two weeks. Heart rate variability and baroreflex sensitivity were derived. Quality of life (QoL), mood and sleep were assessed in study 3. tVNS promoted increases in measures of vagal tone and was associated with greater increases in baroreflex sensitivity than sham. Two weeks of daily tVNS improved measures of autonomic function, and some aspects of QoL, mood and sleep. Importantly, findings showed that improvements in measures of autonomic balance were more pronounced in participants with greater baseline sympathetic prevalence. This suggests it may be possible to identify individuals who are likely to encounter significant benefits from tVNS.