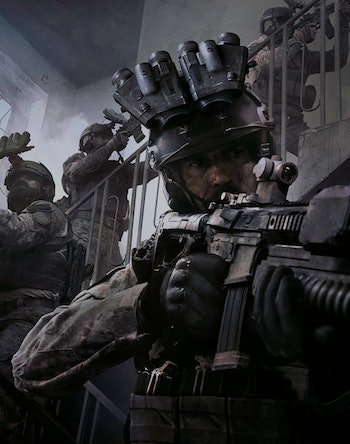 When Call of Duty: Modern Warfare returns this fall with a soft reboot transplanting franchise characters into a contemporary war story, it’ll also bring an intense multiplayer gaming experience that feels unlike anything else in CoD history — or first-person shooter video games in general.

Call of Duty has always focused on hyper-realistic combat, but developer Infinity Ward really means it this time. Long-time fans of the franchise have every right to be excited. Jumpy, feeble gamers with an unsteady trigger finger, however, should be very, very worried.

On July 30, Inverse attended a Call of Duty: Modern Warfare multiplayer preview event held in Los Angeles that included a presentation from the game’s developers and early access to multiplayer gameplay. Edgy, unnerving background music lured a group of press and streamers into an expansive room wreathed in darkness and fog. The decor and the sounds of wildlife gave the illusion that we were deep in the woods in the middle of the night. Plastered to the main screen above the stage was Captain Price, the cigar-chomping hero from the original Modern Warfare games.

In theory, nothing about the Modern Warfare ethos has really changed. According to Infinity Ward studio head Pat Kelly, the game still focuses on realistic combat, offering an “authentic and gritty” experience that emphasizes gameplay quality above all else. The ethos is predictable, but this time around the results are not.

It’s one thing for Kelly to say, “We want you in the shit.” It’s another thing to actually play the new Call of Duty: Modern Warfare and truly feel like you’re in the shit. That’s what happened when I was led into an expansive room with hundreds of individual game stations for the biggest LAN party ever.

During a lengthy gameplay session, we tested various game modes and maps. There were the traditional 6v6 death matches, more objective-based game modes, and even some overwhelming 10v10 matches. But the real highlight was the brand-new 2v2 mode: Gunfight.

Four players in teams of two spawn in the tiniest custom map you could ever imagine. Loadouts are random, switching every two rounds, but every player always has the same gear. The last team standing wins the round (no respawns), which only lasts 40 seconds. The first team to win six rounds wins the match.

In execution, these matches are frantic, exciting, nerve-wracking, and less chaotic than you might imagine. Elevated positions give you an edge, but they also leave you exposed. Running around like a madman will get you shot in the back. Not only do you have to play smart and tactical, but you have to be well-versed in a wide variety of weapons.

At one point I joined a match late, having just returned to my station. I was dismayed to find that I couldn’t see a thing in-game. Someone had turned the brightness down on either the screen itself or in-game. I messed around with both settings and only made it worse. It took me a full two minutes to realize what was going on: I wasn’t supposed to be able to see anything because the match was taking place at night, and my player had to put night vision goggles on to play effectively. (In some cases, players can also interact with light switches to illuminate areas.)

Call of Duty: Modern Warfare breathes life into a franchise that’s felt a bit hollow and repetitive for several years now. They’ve seemingly done it by rebuilding the game from the ground up, using the latest technologies to expand upon what’s always worked for these games.

During the presentation, multiplayer design director Joe Cecot explained that they designed Modern Warfare’s multiplayer so it could cater to different play-styles. Players have options for just about everything now. Because of this, many familiar mechanics have gotten overhauled.

You can reload while aiming down sights. You have options when breaching doors: open it, aim down your sights to “peak” through (and probably throw a grenade), plant an explosive on the door to blow it open, throw a carefully timed grenade at it, run into the door, punch the door, shoot the door. You can do whatever you want to the door.

Call of Duty: Modern Warfare is best played loud so you can feel the many new audio and visual enhancements. Gunfire sounds different when firing from the hip versus aiming down the sights. The way explosives interact with the environment changes based on what direction you’re facing and what kinds of materials they damage. If there’s one thing that helps with realism and immersion, it’s the high quality of the sound design.

In all aspects, it really puts the “modern” in “modern warfare.”

There’s no zombies, no Blackout, no gimmicks of any kind — just aggressive, bombastic, edgy Call of Duty. But the level of technical sophistication in terms of audio, visuals, and even customization will be enough to draw even casual shooter fans. Perhaps best of all, Modern Warfare has become a “unified experience,” meaning that almost like Destiny, progression in one game mode carries over into all game modes. There’s also no season pass. All DLC is free. And it launches with full cross-play on all platforms.

Activision paid for travel expenses associated with this gameplay preview.