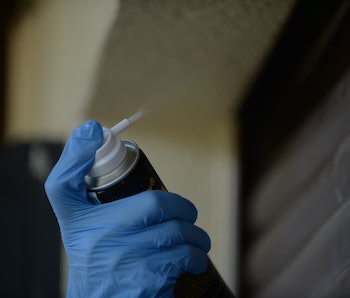 On July 15, law enforcement officials in West Virginia reported that drug users were getting sick and “overdosing” from wasp spray, which was allegedly being used as a substitute for methamphetamine. By the end of the week, many local news outlets had repeated the farfetched claim that people were drying the poisonous substance and smoking it like meth, leading to several overdoses. Experts aren’t buying it, though.

“As I’m sure you’re well aware, drug reporting on the news is almost always totally false,” he says.

Ayana Jordan, M.D., Ph.D., an assistant professor and addiction psychiatrist at Yale School of Medicine, is skeptical of the stories too.

“I think the way in which the story is being reported is not quite accurate,” she tells Inverse.

The local news stories suggest that people are using wasp spray as a drug, either by itself or in combination with methamphetamine. The evidence for this trend, which news outlets reported on in 2018 when it was called “KD” or “wasping,” appears just as thin now as it did then.

The news is based on police and paramedic reports, which are notoriously unreliable on drug trends and should be a warning sign that things are not as they appear. The name’s resemblance to “beezing,” a local-news-fueled trend that claimed teens were getting high on lip balm earlier this decade and turned out to be not quite true, doesn’t help.

The story begins with local police. “People are making a synthetic-type methamphetamine out of wasp spray,” West Virginia State Police Sgt. Charles Sutphin told WCHS on Monday. “From what we’re being told, if you use it, you know, you might use it one or twice and be fine, but the third time when your body hits that allergic reaction, it can kill you.”

Jordan says this description is misleading in a couple of ways.

Additionally, she says the symptoms described don’t sound like an “allergic reaction,” as police are claiming, but either a methamphetamine overdose or a reaction to the neurotoxic ingredients in the wasp spray.

Marino says that there is the minor possibility that people really are getting high on the drug, but he’s still extremely skeptical.

“I suppose it could alter one’s consciousness, but not in a way that seems pleasant to me,” says Marino. “It would directly irritate your mouth/airway, and then it is a neurotoxin and can make you stop breathing.”

If there is indeed something happening with methamphetamine and wasp spray, Jordan suspects that people are using the chemicals in it to make meth because it’s cheaper or easier to get than traditional meth ingredients. She cautions that it’s too early to say this for sure, though, since we just don’t have enough information on this supposed trend.

Jordan is deliberate about calling these stories out as sketchy because of the gravity of the ongoing overdose crisis in the US.

“There’s so much misinformation in the midst of the drug overdose epidemic, so I just want to be clear about what I think is really going on,” she says.

Of course, there remains the possibility that people are in fact using wasp spray to get some kind of high from it. But even if that’s the case, Marino points out that the reports of it happening are so isolated, and the side effects would be so unpleasant, that this isn’t a matter of great concern.

“I can’t imagine people are going to start doing this in droves,” he says.