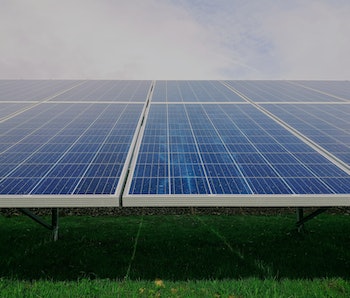 Solar panels could not only bring clean energy to the world — they could also provide clean drinking water to remote communities.

Scientists have developed a single device that produces energy through photovoltaics and clean water using multi-stage membrane distillation. The breakthrough, detailed Tuesday in the journal Nature Communications, not only unlocks new uses for solar panels, it could enable remote communities to receive both energy and water with a single installation, no additional infrastructure required.

“Our cheap PV-MD approach can be a viable solution to produce drinking water for the impoverished communities in developing countries,” Peng Wang, associate professor at the King Abdullah University of Science and Technology in Saudi Arabia and one of the paper’s authors, tells Inverse.

The team has big hopes for the project. The paper notes that solar installations are set to increase to 969 gigawatts by 2025. These panels require four billion square meters of land for sunlight. If all of the panels are outfitted with water-generating devices as well, that could mean a maximum of four billion cubic meters of water also produced annually, or 10 percent of the world’s water consumption in 2017.

It bears similarities to a 2018 project from UC Berkeley scientists, which can produce 200 milliliters of water per day:

It’s the latest in a number of projects designed to make solar panels use space more efficiently. The team used membrane distillation to evaporate and collect water at reasonably low temperatures. A three-stage distillation unit was mounted to the rear of a standard panel. As the sun hits the panel, heat that’s normally dissipated is instead used to collect clean, drinkable water.

Similar breakthroughs, which make more efficient use of space, have already got clean energy advocates excited. The Tesla Solar Roof replaces a roof’s tiles to provide a single design, eliminating the need to place panels on top of a roof. Solar cells have also been used to make translucent windows, blinds, and even cars.

"“Our technology is … attractive for providing drinking water at decentralized scale."

Another breakthrough, pioneered by Germany’s University of Hohenheim, uses the land underneath solar panels to grow crops. “Agrophotovoltaics,” tested in a 2017 experiment, found that while crops grow slower under panels, they were still profitable and the combined uses together increased land efficiency by 60 percent. India’s Cochin International Airport, the first powered entirely by solar, used the land underneath its panels last year to produce 60 tons of vegetables.

But Wang and the team’s findings could have an even greater appeal, specifically among the remote and off-grid communities which are using solar at an increasing rate. The International Renewable Energy Agency found last month that around 372,000 people in parts of Asia and Africa are working in off-grid solar, a figure that’s expected to triple in the coming four years.

Arrays that produce both clean water and solar energy at the same time could dramatically reduce the need for typical infrastructure. Anders Arvidson, project leader at the Swedish International Development Cooperation Agency, previously likened it to parts of Africa that skipped the landline in favor of cellphones. While the energy sector could experience a similar jump, water facilities could make the same move.

“Our technology is suitable and attractive for providing drinking water at decentralized scale in the area with low to medium population density,” Wang says.

The energy shortage and clean water scarcity are two key challenges for global sustainable development. Near half of the total global water withdrawals is consumed by power gen- eration plants while water desalination consumes lots of electricity. Here, we demonstrate a photovoltaics-membrane distillation (PV-MD) device that can stably produce clean water (>1.64 kg·m−2·h−1) from seawater while simultaneously having uncompromised electricity generation performance (>11%) under one Sun irradiation. Its high clean water production rate is realized by constructing multi stage membrane distillation (MSMD) device at the backside of the solar cell to recycle the latent heat of water vapor condensation in each distillation stage. This composite device can significantly reduce capital investment costs by sharing the same land and the same mounting system and thus represents a potential possibility to transform an electricity power plant from otherwise a water consumer to a fresh water producer.

More like this
Innovation
18 hours ago
“Quantum materials” could give the human brain a run for its money, scientists say
By Nathaniel Scharping
Innovation
8.9.2022 11:00 AM
This self-healing material could fix your dinged-up car in 30 minutes
By Molly Glick
Innovation
8.8.2022 10:00 AM
A wild new plane-train hybrid could whoosh you to your destination — if it can get off the ground
By Molly Glick
Related Tags
Share: