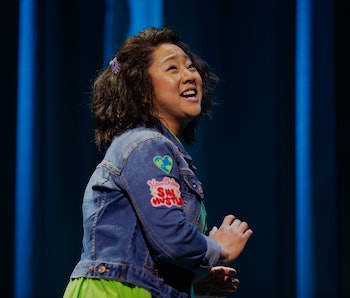 Actress Stephanie Hsu is currently on Broadway as Christine Canigula in Be More Chill, a musical about a kid named Jeremy Heere, who experiences anxiety and depression in his teen years. It’s “about how do we deal with the many voices in our head, how can we cope with that, and how can we better understand ourselves in the process,” Hsu says. “It’s about that, with a sci-fi, musical comedy twist.”

“I find Christine to be the core of truth in the show,” Hsu tells me. “The other characters end up taking a pill called a SQUIP, which is a supercomputer that implants in your brain and tells you what to do, claiming to make life a little bit easier. She adamantly chooses to not take that easy route.”

Hsu is proud that her character is comfortable standing apart from the crowd and stands up for the idea of “allowing your weirdness to be okay.”

“I feel that’s something people of all ages need to be reminded of: Who you are in all your ‘imperfect-ness’ is what makes you wonderful,” she says.

Inverse: Be More Chill has a passionate fanbase. Why do you think this show has connected with so many people?

Hsu: In recent years, there have been a lot of TV shows, movies, and musicals that have been created that orbit around the topic of mental health. But I think why people have connected to Be More Chill is because our show successfully talks about it in a way that also celebrates the uncomfortable, weirdness, and hilarity of anxiety — while, of course, doing it with a lot of heart — as opposed to romanticizing it.

In college, I worked Liz Swados. She wrote a book called My Depression, and then we made it into an HBO animated short.

This was a woman who, throughout her entire life, really dealt with her journey with mental health. I met her because there was a slew of suicides that happened at New York University around 15 to 20 years ago, and so they wanted to find a way to reach young people and give them a place to talk about mental health as a community. They hired Liz to devise a theater piece for the NYU students that talked about all the issues surrounding mental health.

The thing that she always taught us was to not talk about mental health in a way that was not over-poeticizing or over-romanticizing it, because that can actually be incredibly dangerous. What I think our show does a good job at is communicating to people that there is a levity to it all. You can be sad, and you can be confused and depressed, and that doesn’t mean that you are just going to feel in just one way for the rest of your life. I think there’s hope in calling it out and saying, “This is just what it is right now, and I am going to find my way.”

Do you find yourself being drawn to these roles that have a certain level of transparency around mental health?

The journey of this show has definitely taught me a lot about my own desire for the work that I want to be making. What brings me a lot of happiness is to know that the work that I am a part of is, in some way, healing people.

This particular show, because of its fandom before it even came to Broadway, showed me that a little musical performed in New Jersey in 2014 still has the power to affect people’s lives.

Speaking of that transition from New Jersey to Broadway — did you find yourself having to deal with new nerves or stress? Or, because you’ve been on Broadway before with SpongeBob SquarePants the musical, was taking Be More Chill there like riding a bike?

I practice a lot of yoga, and in yoga, one of the teachings is the idea that every moment before this current moment has prepared me for where I am now. And that’s essentially how I felt about Be More Chill going to Broadway.

SpongeBob was my Broadway debut, and it was really hard for me. Broadway is really, really challenging and asks a lot of your physical, spiritual, and emotional self — in a way that nothing could possibly prepare you for other than the experience itself. I feel like I’ve learned so much from doing SpongeBob that, coming into Be More Chill on Broadway, I was much more prepared as opposed to if it was my first time.

For example, a week after Be More Chill opened, we were asked to do Good Morning America and the call time was around 4 a.m. Everyone whose first time it was on Broadway was like, “That is crazy!” and I said, “Yes, that is crazy, and also, that’s just Broadway.”

In taking on roles are there things you have learned that help you transition back to Stephanie?

Rituals are important to me — whether it is a mental moment of releasing and transitioning back, or taking three minutes to sit in my chair after the show and unwinding. It is true that you can really start to carry your characters.

I’m lucky in the sense that Christine has a happy ending. It is a love story, and in the end you do get to have a kiss. I remember when we were rehearsing for Off-Broadway, I was moving through a partnership at the time and having to fall in love in the show and then be falling out of love in my life was very hard in a way that I did not expect.

Because of those types of moments, I have really learned in the past few years that, as an artist, it’s important to have quiet time. You can create a pocket around your sacred self that you don’t need to let anyone enter and you can always come home to. Many artists are also empaths, and that’s what makes us able to share and relate to the world at large. But it also takes a lot to learn how to absorb just enough that you can also release.

I’m a hyper, hyper empath, and when I first moved to New York I would see someone cry on the subway, and I would think about that stranger for days on end. Understanding emotional boundaries has been a lifelong practice.

I’ve come into this practice of not taking in words or energies I don’t want. So, if the people around me are hyper-stressed, being negative, or generally offering something that I know I don’t want in my space, I actively practice creating and going into this soft forcefield around myself. There, those negative words can’t enter my ears.

Be More Chill closes August 11. What do you have up next?

But then, you know — in the vein of talking about taking care of oneself — I’ve been going pretty non-stop from Broadway show to Broadway show for the last two and a half years, and I think I need to take some time to come back to neutral. I have things lined up, but I’m also looking forward to stepping off the gas pedal and considering what I want out of this life.

When you’re a working artist, it’s really easy to not stop. But there’s also a whole big life that’s asking to be lived beautifully and tended to. So, I’m going to do that.

This week’s chill icon is Mort Garson, a pioneer of electronic music and composer of music for plants. You can listen to the excellently titled Mother Earth’s Plantasia here. Garson, now dead, is the subject of a recent, delightful NPR profile because his 1976 album was re-released last month by the independent label Sacred Bones Records. The music is alien and relaxing and what’d you expect from a conceptual artist playing around with synthesizers — all of which is to say, it’s pretty chill.