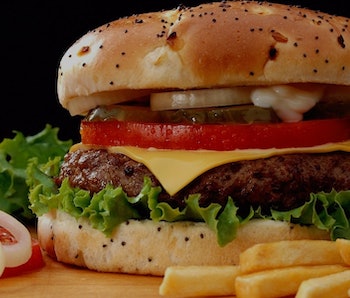 Summer is too short to waste on bad burgers. Unfortunately, with every grilling season comes a preponderance of pathetically pale, flavorless patties, disgracefully laminated with hard, yellow plaster parading as cheese. These sad sandwiches are the unfortunate consequence of the continually eroding relationship between humans and their meat.

Fortunately, this broken relationship is nothing a bit of scientific counseling can’t fix.

While the characteristics of a perfect burger vary between patty enthusiasts, there is one element that every aficionado can agree is crucial to a truly spiritual burger experience: the robust and mysterious “fifth flavor” known as umami. This flavor goes beyond salty, sweet, sour, and bitter, encompassing the sensation of “meatiness” or “brothiness.” Umami is a linguistic attempt to capture the sublime: a hamburger’s rich, salt-laced, fat and earthy mineral juices cascading across your tongue and luxuriating in your mouth.

It’s also a Japanese word that roughly translates to “pleasantly savory,” and scientists use it to describe the flavor we experience when chemical compounds called glutamates and related molecules bind certain receptors on the tongue.

These compounds are naturally found in meat, together with other intensely flavored foods such as anchovies, mushrooms, and fermented items like fish sauce and miso. When you savor a juicy beef burger or a hunk of salty, dank blue cheese, what you’re appreciating is the flood of umami across the tongue.

Umami is a natural quality of some foods, but we’re not slaves to nature’s unjust distribution of glutamate molecules. Scientists and chefs alike have discovered how to boost umami through various forms of manipulation. And when it comes to burgers, everything comes down to the crust.

The most flavorful patties share a certain look: They’re a rich, warm brown, they glisten with natural juices, and, most importantly, their surfaces sport a deeply hued crust. It’s in these darkened, crisp bits that a burger’s umami succulence is concentrated.

Those bits are created through a chemical process called the Maillard reaction, which describes the interplay of amino acids and sugars in food when it’s heated to a temperature over 285 degrees Fahrenheit. When meat is cooked at such high temperatures, those basic building blocks react to synthesize completely new molecules that burst with flavor, as well as dark brown pigments called melanoidins that give seared foods their appealingly dark shade.

When the Maillard reaction takes place in meat, many of the flavor compounds produced belong to a class of molecules called butyrates. (Butyric acid, for what it’s worth, is what gives butter its full-bodied, delicious flavor.) It’s thought that butyrates, in the same way as glutamate, bind the umami taste receptors on the tongue, ultimately giving burgers and other meats cooked at high temperatures their ambrosial appeal.

If all that delectable umami flavor is concentrated in a burger’s crust, and the Maillard reaction happens only on the burger’s surface, then the key to reaching peak umami must be optimizing the amount of surface area to be crusted.

That’s the conclusion that J. Kenji Lopez-Alt, a chef and managing culinary director of Serious Eats, came to in his epic quest to determine the ultimate flavor-augmenting, burger-cooking technique in 2014, and he used a basic geometry principle to make it happen: instead of cooking his lump of beef as one whole patty, he splits it into two thinner patties, which he smashes onto a very hot griddle and flips, browning either side. Barbecue die-hards take note; if optimizing only the meat’s flavor is the end goal, then using a grill won’t cut it because it simply doesn’t allow a good, area-broadening smash.

That said, smashing patties is controversial in the burger community — it does force a lot of juice out, resulting in a drier patty — but there’s no denying that it’s the best way to make the most of a burger’s crispy, salty, mouthwatering crust.

Umami begins with a burger’s sear, but it doesn’t end there. Garnishes — especially strong, salty cheese — can take its savoriness to the next level. An article in the Journal of Food Science in 2007 suggested that cheddar and Swiss cheeses had significant amounts of umami-making compounds, but funky Parmesan is the only one to have been called the “most umami ingredient in Western cookery.”

Whatever cheese you choose to adorn your burger, Lopez-Alt suggests sandwiching it between your two thin, sizzling patties as soon as they come off the grill so that it melts evenly across their surfaces, ensuring that every bite of beef gets an equal share of the rich, fatty cheese blanket — which should compensate for any lost juiciness and barrage your tongue with a final blast of umami to boot.

This article was first published in 2017.

More like this
Science
7.30.2022 7:00 PM
The latest deadly threat to polar bears? Your trash
By Thomas Scott Smith and The Conversation
Mind and Body
7.30.2022 2:00 PM
Why does eating pineapple sting? A food scientist explains the chemistry
By Elana Spivack
Science
7.25.2022 10:00 AM
The best ways to find life using the Webb telescope, according to two astronomers
By Chris Impey, Daniel Apai and The Conversation
Related Tags
Share: