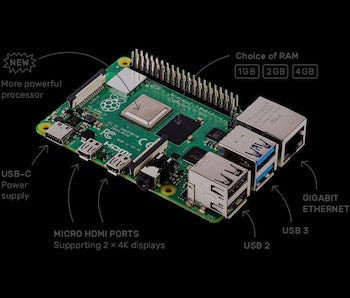 Ever since the original Raspberry Pi micro PC was launched back in 2012, tech enthusiasts around the globe have been coming up with brilliant and innovative uses for the pocket-sized device. However, with the recent introduction of the of the all new, upgraded Raspberry Pi 4 Model B, there are more possibilities than ever before.

For those who might not be familiar, the Raspberry Pi is a miniature computer consisting of a single credit-card circuit board that typically runs a stripped down version of Linux called Raspbian. It was originally created by the Raspberry Pi Foundation as an inexpensive way to teach kids how to code. Given its intended purpose, the Pi’s size, versatility, and low price tag were always more important than raw computing power. However, it turned out that the Raspberry Pi’s size, versatility, and low price tag also made it perfectly suited to perform a number of everyday computing tasks. And before long the tiny low-tech computer had a cult following of programmers and hobbyists who started using it to build all sorts of really cool things, such as custom retro video game consoles, digital media centers, remote controls, home network servers, VPN hosts, and even smart home hubs that work with the Alexa or Google Home platforms.

Raspberry Pi enthusiasts have never really complained about the mini computer’s relative lack of power, because it was precisely the lack of power that made its versatility possible. However, that hasn’t stopped the Raspberry Pi foundation from trying to add a little more oomph. And the latest version has some pretty incredible upgrades that make it the fastest, most functional, and best all-around Raspberry Pi yet.

For comparison, here are the specs of the previous version of the Raspbery PI, the Raspberry PI 3 B+:

And here are the specs of the new Raspberry Pi 4:

With all these upgrades, you can do more with a Raspberry Pi than ever. Need some ideas? Don’t worry, we’ve got plenty.

Of course, the best part about the new Raspberry Pi 4 is that the starting price stays exactly the same. You can still get the world’s best mini computer for as little as $35. Meanwhile, the souped-up version with 4x the RAM is only $55.

Whether you’re an experienced Raspberry Pi user, or you’re just getting started, the Raspberry Pi 4 is an incredible value that’s going to blow your socks off. So what are you waiting for?