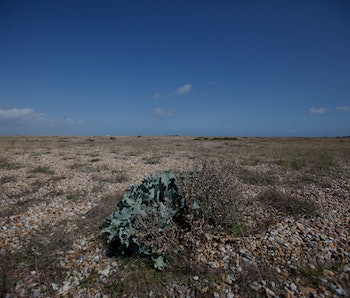 Unless something very surprising (think: a shift in orbit) happens, we will see significantly increased sea levels in our lifetime. This doesn’t simply mean adapting coastal cities and towns to facilitate flood recovery. It also means transforming the way farmers, who won’t be able to keep the saltwater at bay work. Biosalinity — it’s a thing.

As it stands, most crops die if exposed to saltwater. That’s not tenable. So many poor communities in South Asia — but elsewhere too — are turning to saltwater agriculture as an alternative. The Associated Press reported earlier this month on a team of Indian scientists working to grow halophytes, or salt-tolerant plans, by applying everything from conventional cross-breeding experiments to genetic engineering to see what will grow. India doesn’t want to see the green revolution, which saved it from hunger, reversed.

Embracing biosalinity is the stuff of survival for some, but many will experience it as a slow change in diet norms. The romaine lettuce of the future may be a more tidal affair. Farmland may look more marsh-like. You may find yourself eating these saltwater delicacies.

The young shoots of glasswort plants are already served in raw salads, but it can stand alone and is treated as a specialty by many restaurants across Europe.

Native to Asia and Europe but grown everywhere now, most species of saltbush are edible, but humans are particularly enamored with the Garden Orache variety, which has a salty, spinach-y taste. The bush’s leaves are often used in salads or cooked into dishes. Many farmers feed saltbush to sheep, which creates a leaner, more hydrated lamb meat, with higher levels of vitamin E.

A European cultivar related to cabbage, sea kale shoots are best served steamed and sauced like asparagus. But it tends to be easily bruised or damaged, which means it ought to be eaten very soon after cutting.

Sea spinach first made its way into the culinary world in the 18th century, when Captain James Cook of the HMS Endeavor and his crew picked and cooked the plant to fight scurvy. Its edible leaves are the halophyte version of spinach, and it’s cooked in virtually the same way.

In the Maldives, the mangrove apple fruits are eaten regularly by people. They taste like cheese and are often consumed raw, but some other countries the fruits are used to make vinegar.