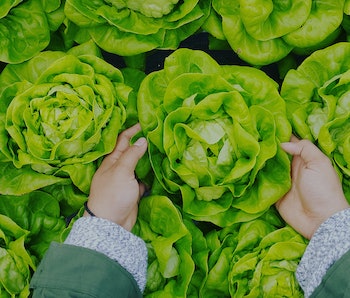 Is lettuce slowly killing the planet? For Aaron Bastani, it’s emblematic of humanity’s cavalier approach to markets and the environment.

“Flying a lettuce from North America to Europe, which has zero calories, burning hydrocarbons to do so is really stupid,” Bastani author of the recent Fully Automated Luxury Communism: A Manifesto, said during a Virtual Futures event about his new book.

The author, known among the British left for co-founding Novara Media, caused a stir this month when he penned a New York Times article outlining his post-capitalist vision. New technologies like robots and automation could provide a rich abundance of resources for humanity, but Bastani argues that capitalism will impose scarcity to maintain profits.

Part of the issue with global capitalism is how it measures success. Sending a lettuce on a plane across the globe may increase profits, and could even boost gross domestic products. On those measures, this international lettuce business has been a great success — but the environment probably disagrees.

Bastani argued that humanity needs a new way to measure social progress beyond gross domestic product. This would include factors like concentrations of carbon dioxide per square meter, the Human Development Index, literacy or life expectancy. The current system, he argues, places too much emphasis on a small number of factors.

“You go to the back of The Economist, the GDP scores, it’s like football for dweebs!” Bastani said. “And that’s the house publication of the global capitalist class. That’s literally how they understand success.”

Bastani is not the first to argue against GDP, which rose in popularity after the Second World War as a way to measure recovery rates and subsequent growth. The World Economic Forum now argues that GDP is “destroying the planet” as it increases even when humans destroy the planet. Economist Joseph Stiglitz has declared it “too materialistic.”Even The Economist argues that GDP is “less suited to the task of measuring modern, service-led economies that are geared towards the quality of consumer experience.”

$6 million worth of imported lettuce could be enough to show why an alternative is needed. The World Economic Forum has suggested the Inclusive Development Index, which counts employment and life expectancy among its measures. Another option is the Human Development Index, a measure developed by the United Nations.

Whichever the result, it could bring to light how flying lettuce across the globe is a really bad idea.