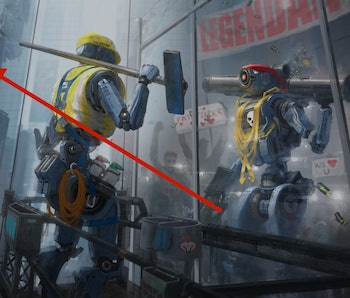 Apex Legends developer Respawn Entertainment has already confirmed that Wattson, a character who wields electric barriers, would be the new Legend to arrive in Season 2, but recent leaks indicate that a second hero named Crypto might also be on the way. He’s a sword-wielding hacker that could be Apex Legends’ first cool villain, and he may already be hiding in plain site.

Earlier this month, redditor u/FrozenFroh shared a popular theory to the Apex Legends subreddit about how the start of Season 2 might include a tease for Crypto, and that the character’s actions behind-the-scenes could have a huge impact on the game’s overall story. (This same Reddit user accurately predicted the L-STAR, Wattson, and the presence of Leviathans and Flyers in a March post.)

Referencing leaked information from Apex Legends data-miner @That1MiningGuy, FrozenFroh reveal that “Crypto’s teaser file was added in the Legendary Hunt update” that was released in early June. The going theory is that Crypto is the character featured in Pathfinder concept art for the game, he wields a sword that’s part of the Season 2 logo, and his other abilities involve jamming enemy abilities.

If these details about his abilities are true, then Crypto’s abilities would seemingly function like a fusion between Genji and Sombra from Overwatch: a sword-wielding cyborg who can deflect enemy gunfire and who also happens to be an elite hacker capable of disrupting enemies.

The teaser in the game files appears to be related to a laptop found near the repulser, leading FrozenFroh to conclude that at the start of Apex Legends Season 2, Crypto will use his hacking skills to shut down the repulser on the island, therefore allowing the giant Leviathans and the Flyers to attack the island directly.

As of right now, Flyers are already interacting with players, but if the repulser is shut down, there’s nothing stopping the behemoths from stomping all over. Entire locations might be destroyed, but there’s also the presence of a “Beast Master” game master in the game’s files. Will Season 2 involve players killing Leviathans and Flyers in regular matches? Or will that just be part of a separate Apex Legends game mode? That remains to be seen.

Similar to how Fortnite uses brief cinematic videos to transition into each new season full of map changes, Apex Legends might do the same with a Season 2 teaser about Crypto’s mission to disable the repulser. Maybe it’s Wattson’s job to build a new electric fence? Even if this theory about Apex Legends Season 2’s story turns out incorrect, it still seems like Crypto will be the next Legend released for Apex Legends after Wattson.