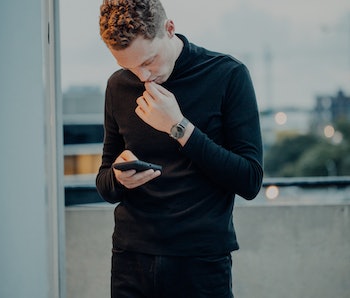 The human skeleton — a hulk of 206 living bones — is malleable. Long ago, at the start of the Holocene, human bones became less dense as a result of a less active lifestyle. With the rise of farming, and in turn the creation of cheese, our jaws became weaker. Now, recent research shows that skeletal adjustment is yet again underway, and it has to do with another change in human lifestyle.

That change is the widespread adoption of consumer technology aka smartphones. And this time, bodies aren’t compensating by becoming weaker: Instead, people seem to be growing skull “horns.” These spikes are located near the back of the skull, and according to the scientists who study them, if you have one, you can probably feel it. The working theory is that they are emerging more frequently because of the terrible posture associated with looking down at screens, a phenomenon often referred to as “text neck.”

A study on this phenomenon was published in Scientific Reports in February 2018, and it re-entered the news cycle after it was featured in a June BBC article discussing the effect modern life has had on the human skeleton. The Scientific Reports paper is the second in a series of three — one published in March 2016, another in March 2018 — conducted by Australian scientists David Shahar, Ph.D. (aka Dr. Posture) and Mark Sayers, Ph.D.

Technically these bone “horns” are called enthesophytes. These jagged projections typically emerge from spots called “entheses sites,” which are especially vulnerable to injuries linked to biomechanical stress. It’s thought that enthesophytes help our skeletons deal with that stress by spreading it over a wider area.

Shahar and Sayers’ findings contrast previous reports that had only found large enthesophytes — that means larger than 10 millimeters — in older adults. That changed when, in their 2016 paper, they found bony skull outgrowths in 40 percent of 218 young adults they examined, who were somewhere between the ages of 18 and 30.

This most recent paper in Scientific Reports was an evaluation of 1,200 X-rays belonging to Australians between the ages of 18 and 86. They found that within the entire group, 33 percent had the bone growth. But it’s when they looked at the ages of the subjects that they really found something unique: The likelihood of having the bone growths actually decreased with the participant’s age. This realization stands counter to the idea that enthesophytes pop up when an aging body needs help handling the degenerative process of aging. And because enthesophytes take significant time to develop, the scientists hypothesize they started forming in the younger subjects during their childhood.

While more research is needed to know for sure, Shahar and Sayers have singled out the most likely culprit behind the phenomenon: the bad posture associated with frequent phone use.

“We hypothesize EEOP [the development of enthesophytes] may be linked to sustained aberrant postures associated with the emergence and extensive use of hand-held contemporary technologies, such as smartphones and tablets,” they write.

Furthermore, Shahar and Sayers argue their findings “raise a concern about the future of musculoskeletal health of the young adult population and reinforce the need for prevention intervention through posture improvement education.”

While the spikes themselves don’t seem to pose any danger, the scientists do note that they are a sign that a person’s head and neck aren’t in the proper configuration, which could mean problems down the line. The study is novel in the sense that its researchers told The Washington Post that it’s the first documentation of skeletal adaptation to advanced technology — but it’s important not to jump to conclusions. Our bodies adjust to the changing worlds we put them in: It’s up to us to determine what those worlds are going to be.

Recently we reported the development of prominent exostosis young adults’ skulls (41%; 10–31 mm) emanating from the external occipital protuberance (EOP). These findings contrast existing reports that large enthesophytes are not seen in young adults. Here we show that a combination sex, the degree of forward head protraction (FHP) and age predicted the presence of enlarged EOP (EEOP) (n = 1200, age 18–86). While being a male and increased FHP had a positive effect on prominent exostosis, paradoxically, increase in age was linked to a decrease in enthesophyte size. Our latter findings provide a conundrum, as the frequency and severity of degenerative skeletal features in humans are associated typically with aging. Our findings and the literature provide evidence that mechanical load plays a vital role in the development and maintenance of the enthesis (insertion) and draws a direct link between aberrant loading of the enthesis and related pathologies. We hypothesize EEOP may be linked to sustained aberrant postures associated with the emergence and extensive use of hand-held contemporary technologies, such as smartphones and tablets. Our findings raise a concern about the future musculoskeletal health of the young adult population and reinforce the need for prevention intervention through posture improvement education.

More like this
Science
8.4.2022 6:15 PM
3D analysis reveals a key similarity between dinosaur and bird embryos
By Charles Q. Choi
Science
8.1.2022 10:30 AM
These 6-million-year-old teeth may be from Europe’s last panda species
By Elana Spivack
Science
7.31.2022 1:00 PM
How do cats co-exist with each other? The answer may lie in their gut
By Tara Yarlagadda
Related Tags
Share: