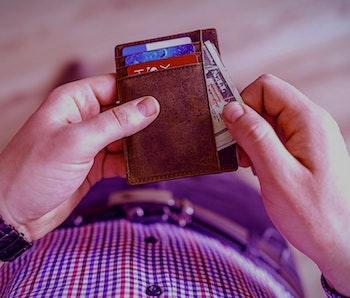 When your wallet falls out of your bag, it begins a perilous journey into the crux of human morality. Will a stranger turn the wallet in? Will they pocket the cash and run? An experiment involving 355 cities and thousands of “lost” wallets suggests that humans are far more altruistic than you might think, but for strikingly self-serving reasons.

In a paper published Thursday in Science, a team of scientists in Utah, Michigan, and Switzerland reports that people across 40 different countries were overwhelmingly more likely to return cash-laden wallets than wallets without cash. To test how people would act when confronted with the dilemma of a found wallet, the team staged an international wallet experiment in which 13 research assistants posed as tourists and pretended to turn in “lost” wallets to banks, theaters, or public offices.

The study’s authors, led by Alain Cohn, Ph.D., an assistant professor of information at the University of Michigan, placed 17,303 wallets containing different combinations of objects and cash in the path of temptation. Then, over the course of three years, they waited to see how many people at those institutions contacted the fake wallets’ owners.

Cohn explains that humanity responded altruistically. More than 50 percent of people contacted the wallets’ owners if there was any cash in it, and that percentage went up when there was a lot of cash inside. That finding, he says, shows how our psychological motivations come into play when we’re faced with temptation.

“So this finding is not only robust across countries and institutions, but it also holds when the wallet contains a substantial amount of money,” Cohn told reporters in a teleconference on Tuesday. “The results of our study are consistent with most of human behavior that incorporates psychological motivations such as altruism and self image concerns.”

How Likely Is It That People Will Return a Cash-Laden Wallet?

On average, 40 percent of people in the study were likely to report a lost wallet with no money inside to its owner. When roughly $13 of cash was in that wallet, subjects were 51 percent more likely to return the wallet, across 38 of the 40 countries studied in this analysis.

Only two, Mexico and Peru, showed non-statistically significant decreases in wallet return rates. The authors caution not to speculate too much about what’s going on in those two countries, since their findings weren’t significant.

"It’s natural to assume that this is simply because people are altruistic and because they care about the owner of the wallet."

The fact that people were more likely to return a cash-filled wallet was surprising in itself, added study co-author Michel Maréchal, Ph.D., an economist at the University of Zürich, so they upped the ante. “We first did not believe these results and told [a student volunteer] to triple the amount of money — maybe just the amount of money was too small,” he said.

But when they upped the amount to about $94 in three test countries (the UK, Poland, and the US) to really tempt people to keep the wallet, 72 percent of the participants reported the wallet missing. And, at the end of the day 98 percent of the cash left in the 17,000 experimental wallets was returned, suggesting that the vast majority of people weren’t pocketing the cash and then turning the wallet in afterwards.

Why Would Someone Return a Lost Wallet?

As tempting as cash can be, it wasn’t the only thing in the wallets. Each lost wallet was transparent and included a key, a grocery list, and business cards. That combination of items helped the authors derive some ideas about what drives people to help one another out.

The key ended up being an important factor in wallet return rates. Wallets that had keys in them were, on average, 9.2 percentage points more likely to be reported as lost by strangers. This suggests an altruistic element, as Cohn noted.

“Because the key is only valuable to the owner but not to the finder of the wallet, this suggests that part of why people return the wallet is indeed altruism,” he said.

But it’s probably not just altruism causing people to return lost wallets. Ultimately, he says that we’re probably more motivated by how we view ourselves. In a followup survey, Cohn and his co-authors surveyed people in the US, the UK, and Poland about whether it would feel like stealing to not report a stolen wallet. These surveys showed that respondents felt like they were stealing when the wallet contained any money, but especially so when it was filled with a lot of it.

Cohn proposes that people in this study were averse to seeing themselves as thieves, and the desire not to feel like a bad actor may have pushed them to return a wallet — especially if there was a lot of cash in it. In short, we’re just as motivated by an “aversion” to seeing ourselves as thieves as we are by a desire to do the right thing.

“It’s natural to assume that this is simply because people are altruistic and because they care about the owner of the wallet. However, there’s a lot of research that suggests that even though people care about others, they still tend to care more about themselves,” Cohn said.

Perhaps one form of motivation is more gallant than the other. But ultimately, anyone who has rushed back to a shop desperately hoping to find their wallet on the checkout counter probably doesn’t care why the strangers in the store elected to leave its contents intact.

The good news is that, according to this analysis, there’s a good chance your belongings will still be there.

Civic honesty is essential to social capital and economic development, but is often in conflict with material self-interest. We examine the trade-off between honesty and self-interest using field experiments in 355 cities spanning 40 countries around the globe. We turned in over 17,000 lost wallets with varying amounts of money at public and private institutions, and measured whether recipients contacted the owner to return the wallets. In virtually all countries citizens were more likely to return wallets that contained more money. Both non-experts and professional economists were unable to predict this result. Additional data suggest our main findings can be explained by a combination of altruistic concerns and an aversion to viewing oneself as a thief, which increase with the material benefits of dishonesty.

More like this
Mind and Body
Sep. 18, 2022
Scientists know why we are so indecisive — and how to get over it
By Sarah Sloat
Mind and Body
Sep. 24, 2022
These two daily activities are wreaking havoc on teens’ sleep
By Horacio de la Iglesia and The Conversation
Mind and Body
Sep. 16, 2022
Need to use 988? 4 key questions about the new mental health crisis hotline, answered
By Katie MacBride
Related Tags
Share: