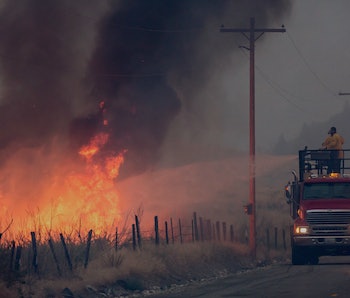 The Californians suffering the worst of the state’s drought are the ones in prison. First, the state department of corrections decided that denying them showers was the best way to deal with a directive to cut back on water use. Now, with a countryside covered in dried, dead vegetation fueling the west’s epidemic of wildfires, inmates are being put on the front lines to suppress the blazes. For this, they are paid $1 an hour.

Though it’s receiving more attention lately, Think Progress notes that California has turned to the cheap, plentiful labor of inmates to fight fires since the 1940s. But a unique twist is that as climate change is turning the west coast into a tinder box, so to is the California prison system under heavy criticism for the unconstitutional overcrowding in its prisons. California’s firefighting system is already heavily reliant on those inmate volunteers, but that’s one more West Coast pool about to dry up as the state frees more and more prisoners. At least 2,700 have been set free this year after a state ballot initiative reducing several nonviolent felonies to misdemeanors.

While the volunteer inmate population only gets a buck an hour for firefighting, that’s more than the average of $1.40 to $3.90 they’d pull down in work camps during the day. But compared to the estimated $2,592 to $3,240 it costs California to run a crew of professional firefighters, that’s a steal.