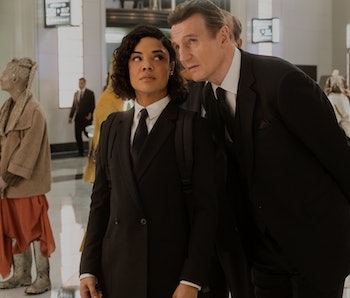 The Men in Black are back, but for how long? Men in Black: International is in theaters now, featuring a fresh cast on a hilarious new adventure. Of course, this is a major franchise, so we have to ask: Is there a post-credits scene designed to set up the sequel? What can we speculate about MIB: International 2? Here’s everything you need to know.

Warning: Spoilers for Men in Black: International below. Stop now if you don’t want to know how the movie ends — unless you have easy access to a neuralyzer.

By the end of the movie, Agent High T (Liam Neeson) has been exposed as a secret evil alien and defeated. Agent H (Chris Hemsworth) takes over as head of the MIB’s London office, while M (Tessa Thompson) returns to New York with O (Emma Thompson) as a full-fledged agent. Oh also, Pawnee (a tiny alien voiced by Kumail Nanjiani) stays in London to keep an eye on H despite pledging his allegiance to M earlier in the movie.

So where does that leave us? The obvious plot for Men In Black: International 2 would reunite M and H for some new world-threatening event — possibly the return of the evil Hive or maybe some other alien menace. This seems like an easy win too, considering the amazing comedic chemistry these two actors clearly have, but it’s not the only option.

Personally, I’m more interested in seeing Emma Thompson’s character play a larger role in any potential sequel. She’s only in a few scenes in International, but she makes a big impact. Now that Agent M is back home, perhaps the two can adopt a sort of mentor-mentee relationship that feels closer to the one we saw between Tommy Lee Jones and Will Smith back in the original MIB.

In this scenario, Hemsworth could still have a cameo, or even play a major role in the second half of the movie while bringing Nanjiani along for the ride. But assuming we get another Men in Black movie, it would be great to see International’s most overlooked agent get a bit more screen time.

Men in Black: International is in theaters now.

More like this
Entertainment
8.3.2022 10:00 AM
Lightyear’s post-credits scene secretly sets up a nostalgic Pixar sequel
By Dais Johnston
Entertainment
7.28.2022 12:00 PM
Nope ending explained: The deeper meaning of Jordan Peele’s sci-fi thriller
By Eric Francisco
Entertainment
8.1.2022 2:00 AM
Westworld Season 4 just copied one of the best Doctor Who episodes ever
By Ryan Britt
Share: