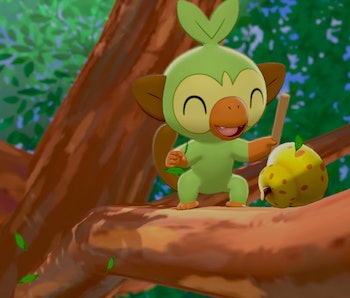 Nintendo has revealed that Pokémon Sword and Shield will take its iconic franchise to new heights. It added a flurry of new Pokémon, made the games open-world, and even introduced Dynamaxing, which temporarily turns Pokémon gigantic during battle. But a lot about the upcoming installments still remains a secret and Nintendo might have unintentionally leaked two of the games’ new features during E3 2019.

Inverse got 15-minute of hands-on time with an early version of the games at E3. I got to battle my way through the Galar region’s water-type gym and face off against its gym leader, Nessa. As I advanced through the demo I stumbled across a couple of in-game actions that seemed to be features in development.

If I tilted the Switch controller’s left analog stick forward and pressed down my Pokémon trainer whistled and if I flicked the joystick in a circle my character began to dance.

“The developers haven’t told us why the whistling and dancing mechanics are in the demo,” a Nintendo representative tells Inverse. “But it’s unclear if they’ll make it to the final version of the game.”

There weren’t any immediate clues as to what these actions could be used for in-game because of the demo’s limited scope, but looking back at past Pokémon games provides some hints.

Pokémon Diamond, Pearl, and Platinum all featured walking Pokémon, which let certain Pokémon following behind players instead of staying inside of their Poké Balls outside of battle. Players were able to interact with their Pokémon by turning around and talking to them and the Pokémon could hold and pick up items, too. ‘Pokémon Sword and Shield’ might take then even further.

Players could whistle to have their Pokémon perform an action to help players traverse the game. Pokémon: Let’s Go, Pikachu! and Let’s Go, Eevee! introduced Secret Techniques, which let some Pokémon push obstacles out of the way or light up a dark caves. Whistling might also let players summon Pokémon to swim them across oceans or fly to other areas of the Galar region.

The dance mechanic is more of a mystery, but it could be an emote players can use to interact with other trainers during online events.

‘Pokémon Sword and Shield’ will introduce Max Raid Battles, where up to three players can team up online or locally to fight and catch Dynamax Pokémon. Dancing might be the precursor for other emotes, like waving or pointing, that could be introduced in this multiplayer mode.

Fans will need to wait until the next Nintendo Direct to find out for sure. But it’s odd that developers would add these actions into the demo without a bigger plan in mind.