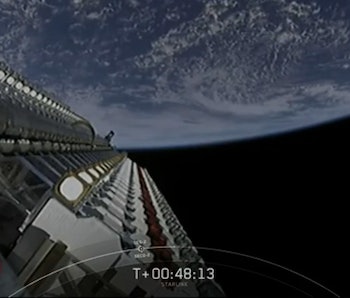 On May 23, Elon Musk’s SpaceX launched 60 Starlink communication satellites aboard a single Falcon 9 rocket as part of a new effort to provide internet service to everyone in the world. Within days skywatchers all around the world spotted them flying in formation as they orbited Earth and reflected sunlight from their shiny metal surfaces.

Many people, who weren’t aware that artificial satellites can often be seen moving against the starry background on clear nights, reported UFO sightings. However, Astronomers knew exactly what they were seeing and were immediately concerned.

They fear that the constellation of broadband-beaming satellites, which SpaceX plans to one day grow to as many as 12,000, could ruin scientific observation of the skies from telescopes. SpaceX founder Elon Musk had suggested that the satellites would be barely visible just barely, if at all. But the Starlink constellation shines as brightly as many astronomical constellations.

“I think it’s commendable and very impressive engineering to spread the information and opportunities made possible by internet access,” said Megan Donahue, President of the American Astronomical Society, in a statement released on Monday. “But I, like many astronomers, am very worried about the future of these new bright satellites.”

On Monday June 10, in St. Louis, Missouri, the AAS Board of Trustees made the following statement on satellite constellations:

“The American Astronomical Society notes with concern the impending deployment of very large constellations of satellites into Earth orbit. The number of such satellites is projected to grow into the tens of thousands over the next several years, creating the potential for substantial adverse impacts to ground- and space-based astronomy. These impacts could include significant disruption of optical and near-infrared observations by direct detection of satellites in reflected and emitted light; contamination of radio astronomical observations by electromagnetic radiation in satellite communication bands; and collision with space-based observatories.”

"The number of such satellites is projected to grow into the tens of thousands…creating the potential for substantial adverse impacts to ground- and space-based astronomy."

“The AAS recognizes that outer space is an increasingly available resource with many possible uses. However, the potential for multiple large satellite constellations to adversely affect both each other and the study of the cosmos is becoming increasingly apparent, both in low Earth orbit and beyond.”

And it’s not just the AAS: the Royal Astronomical Society, based in London, has voiced concern over the controversial satellite constellation.

In a statement it also warned: “Initial images of the constellation suggest that they will exhibit frequent reflective flaring, where transient alignment with sunlight leads to temporary surges in brightness.

“The deployed networks could make it much harder to obtain images of the sky without the streaks associated with satellites, and thus compromise astronomical research.”

“Given the scale of these projects, there is also the prospect of a significant and lasting change to the views of the night sky until now enjoyed throughout human history and pre-history. The night sky is part of the cultural heritage of humanity and the Society believes that it deserves protection.”

The Starlink satellites and similar projects being developed by other companies could eventually outnumber the stars visible in our night sky.

Starlink will become operational once 800 satellites have been activated, which will require a dozen more launches.

More like this
Science
Feb. 4, 2023
Astronomers May Be on the Cusp of a “Potentially Revolutionary” Cosmological Breakthrough
By Universe Today and Matt Williams
Science
3 hours ago
What Mysteries is the Universe Hiding from Us? A Cosmologist Weighs In
By M. Mitchell Waldrop and Knowable Magazine
Science
Feb. 4, 2023
The Milky Way Galaxy May Be a Unique Heavyweight in One Weird Way
By Evan Gough and Universe Today
LEARN SOMETHING NEW EVERY DAY.
Related Tags
Share: