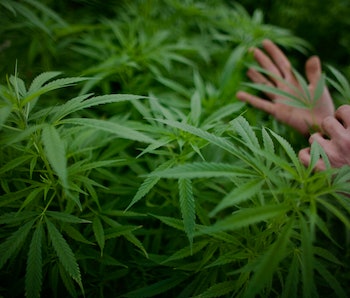 It isn’t just pot smoke filling Denver living rooms these days. A new problem with the legalized weed movement has surfaced: Zealous growers have snapped up all the city’s warehouse space. As The Wall Street Journal reports, marijuana producers took full a third of the warehouse space leased in Colorado over the past year-and-a-half. Whoa. It goes on:

Rents in the Colorado warehouse market rose 10% last year, to $5 a square foot, according to CBRE Inc., a real-estate services firm. The cost to buy warehouse space has doubled to $80 a square foot since the beginning of last year.

While the, ahem, growth is a sign of success in one arena, other businesses are being priced out. And they are pissed. Check out this dude, Steve Badgley, who has been searching for a larger space for his building-supply business: “It’s all just getting snatched up by these marijuana people,” he says. Smoke a joint and chill out, Steve.

Seriously, though, I did a few months of work in the composting business back in 2010 and warehouse districts were jammed with pot producers. You could smell it everywhere. And that was before recreational marijuana became legal. It was just medical! It has to be bananas now. If there were a major fire in Denver, everyone in Wyoming, Utah, and Arizona would get high.

Matt Celesta is vice president of production and product development for Waste Farmers, a company that makes organic soil, among other things, and he deals first-hand with growers. “It is like a new ‘green’ gentrification,” he told me. “Just as farmers got pushed out for residential development, small business owners and manufacturers are losing space to cannabis grows and dispensaries. We can expect short monetary gains but might lose long-term cultural and infrastructural gains to accommodate.”

Go ahead and check this list to see if you should start buying up warehouses in your town soon.