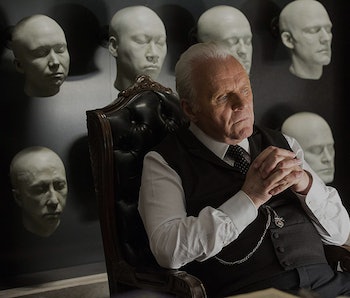 Westworld Season 2 expanded the show beyond its titular Wild West-themed park, revealing Shogun World (feudal Japan) and The Raj (colonial India). With Westworld Season 3 arriving in 2020, can fans of the HBO show expect to see even more Delos parks? Some impressive internet sleuthing may have already spoiled one of Season 3’s biggest reveals: War World.

Redditor u/Lukedriftwood recently discovered that the domain name discoverwarworld.com had been registered by MarkMonitor Inc., the same company that also owns other legitimate Westworld websites like discoverwestworld.com and discovershogunworld.com.

What is War World? We have no idea, but a common guess on the Westworld subreddit is that it may be a World War II-themed park where guests can pretend to kill Nazis. That may sound like a departure from Delos parks we’ve seen so far, but considering the enormous popularity of WWII movies and video games, it makes sense that people would pay big bucks to experience the war for themselves.

Domains for Westworld and Shogun World lead to the actual websites for both parks. Interestingly, the Westworld park site in particular has been updated to follow along with the events of Westworld. This means that the official Westworld website contains error messages and full-page descriptions hinting at the Host uprising and subsequent chaos that broke out at the Westworld theme park in Season 2.

It stands to reason that if the domain for a Delos theme park called War World is formatted similarly to the two domains that lead to active sites for known Westworld parks, then Season 3 could be gearing up to introduce viewers to this new park. Per the fictional Delos website, we know there are at least three other parks in Delos’ holdings but the site doesn’t let users click through to Parks 3, 4, or 5 just yet. War World could definitely be one of these unknown parks.

It’s also worth noting that a quick conversation with Aeden (the customer service bot on the Delos website) about the existence of Warworld yields interesting results. Just like the Westworld website contains updated information connected to the events of Westworld, Aeden’s knowledge database seems to be continually updated to function based on the events of Westworld, too.

I decided to try and talk to Aeden to see if it could confirm the existence of War World or give any clues about this mysterious park. So, I told Aeden, “Take me to discoverwarworld.com.”

As you can see below, Aeden’s reply, “That sounds like something to me…” was pretty telling. On Westworld, Hosts have been known to comment “That doesn’t look like anything to me” if they come into contact with anyone or any objects that are not programmed to be recognizable to them. In Season 1, we Bernard is revealed to be a Host because he is programmed to not see the designs for his Host form. Here, Aeden’s reply “That sounds like something to me…” implies the opposite of that phrase heard on the show and possibly confirms War World’s existence.

I tried to investigate further by asking Aeden, “Does Warworld exist?” Again, Aeden used language we’ve heard on Westworld. The bot replied to my question by saying, “This feels familiar…Reminds me of a dream.”

In Westworld speak, dreams are often programmed by Westworld technicians. But, as we saw in Westworld, Hosts also classify dreams to be “memories” of their involvement in other storylines or other experiences they’ve had in the park in the past. It’s been intended as a way to keep the Hosts from gaining sentience while also giving them the ability to interact in a more humane way with park guests. Aeden’s mention of Warworld reminding it of a dream again implies the War World exists or could have existed as some point in Delos’ history.

Right now, there have been no other hints about War World as seen in the first trailer for Westworld Season 3 or in any interviews given by the cast or showrunners Jonathan Nolan and Lisa Joy. Theories abound that the world we saw in the first Season 3 trailer is actually another park and not the real world, based on the actions of Aaron Paul’s character, who is seen committing a robbery, and some of the more mysterious actions being taken by Dolores (Evan Rachel Wood). If War World exists, what we’ve seen in the trailer could be that park. Or, maybe Westworld is gearing up to deliver a completely new park, and this domain registration is just the first step.

Westworld Season 3 will premiere on HBO in 2020.