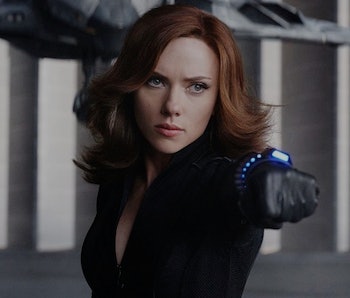 Iron Man wasn’t the only Avenger who sacrificed himself to ensure Thanos’ defeat in Avengers: Endgame. Black Widow plummeted to her death on Vormir so that Hawkeye could get the Soul Stone, and she was still dead at the end of the movie. Considering that Scarlet Johansson’s super spy character is getting a solo movie, this presents a pretty big obstacle for Marvel’s writers, but a new theory argues that Black Widow actually came back to life at the end of Endgame before setting out on a new mission to find her father in the Black Widow movie.

Known as Natasha Romanoff, the former Agent of S.H.I.E.L.D. was a Russian super spy prior to joining the organization and, later, the Avengers. Much like her backstory, though, there isn’t much information about her untitled project. Set photos did reveal production underway in Norway and in the photos, Scarlett Johansson is sporting Black Widow’s signature red hair, minus the blonde tips she had in Endgame (no doubt a point to show how little she cared about her appearance while grieving). Fans have speculated (and so have we) that the film could take place at any point after Captain America: Winter Soldier and before Captain America: Civil War. But what if the film takes place after Endgame? Crazy, right? But not impossible.

Redditor u/preorom theorizes that Red Skull had to bring Black Widow back to life after Captain America returned the Soul Stone. But if that’s what happened, why didn’t she appear to her friends at the end of Endgame?

“She wanted to handle something in her past,” writes u/preorom. “As you know Red Skull told her father’s name. Ivan. So she’s going to find her father.”

Natasha also still has her time travel gear and enough fuel for at least one more trip. So it’s possible that instead of returning home she could go even further back in time to track down the father she never knew about. (In this scenario, David Harbour may even play her absentee dad Ivan.)

It would be easy to read this theory and scoff at the idea that Black Widow’s sacrifice could be undone. After all, her solo movie could be a prequel detailing her days as a Soviet spy prior to her introduction in Iron Man 2 and it’s not like any of the MCU films have thoroughly delved into her history. So there are a lot of unknowns when it comes to Natasha’s life that could be explored. While the film could turn out to be a prequel, any comic book fan knows it’s always possible to resurrect characters, and Black Widow might prove no different.

This theory works primarily to fill in the gaps and emotional dissatisfaction with Black Widow’s arc in Endgame. For example, Tony was given a proper funeral service while Natasha barely garnered more than a mention after her sacrifice.

There’s also the fact that Red Skull brought up the name of her father, Ivan, and she revealed she hadn’t even known his identity. Why bring him up in the same scene as her death if that wasn’t going to come into play in the Black Widow film? Endgame gave us a new glimpse into her past by mentioning Ivan, so there’s definitely more to that story. Additionally, Phase 4 of the MCU is still a big mystery, so anything’s possible.

Perhaps Red Skull brings Natasha back because he knows she has more to accomplish. If she’s on a covert mission, she wouldn’t be able to contact the remaining Avengers, so being on her own would make sense. As to how she’d be able to come back to the present from Vormir, well, Black Widow was still wearing the Quantum Realm suit when she died, so it’s safe to assume she can still use it. While Natasha’s death is still a sore spot post-Endgame, she is finally getting her own solo movie and it’s long overdue.

Black Widow does not yet have a release date.