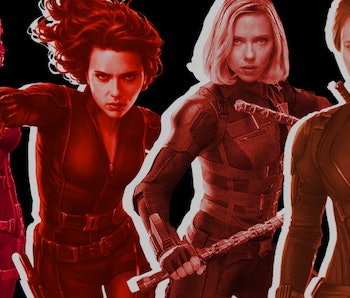 Aside from movies like Captain America: The First Avenger and Captain Marvel, most of the Marvel Cinematic Universe runs in a linear timeline, but that’s about to change with the still-mysterious “Phase 4” of the MCU. The upcoming Black Widow solo film is poised to take place in between movies, or maybe it’s a period piece set in the 2000s? We still know practically nothing about the movie, but new set photos showing Scarlett Johansson — and more importantly, her hair — may hold the answer.

On Wednesday, paparazzi photos of Black Widow began surfacing online as production kicked off in Sæbø, a village in southwestern Norway. Local residents heard a major Hollywood film was shooting in their hometown, with heavy speculation that the movie would be the next James Bond. Then the day came and they found Scarlett Johansson walking around picking up snacks, confirming the big project is actually Marvel’s Black Widow.

Of all the things the photos show, it’s Johansson’s hair that could be most useful to pinpointing continuity for Black Widow. As Marvel fans are aware, Natasha has one of the most diverse hairstyles out of anyone in the MCU, having sported everything from short red hair (The Avengers) to a blonde mane in Avengers: Infinity War and the opening scenes of Endgame.

With Johansson’s hair color in these paparazzi photos, we can guess that maybe the film will take place circa Iron Man 2 (2010), Captain America: The Winter Soldier (2014), or Captain America: Civil War (2016). In those movies, Johansson wore long red hair, albeit in different styles.

Meanwhile, just speaking as a dude with two eyes, the style looks reminiscent of the way she kept her hair in Avengers: Endgame, just without the blonde tips. Then again, as my coworker Allie Gemmill points out, this hairdo screams early 20s or even teenager, which could be possible if Marvel plans to use it’s de-aging technology on ScarJo.

What do you think? Let’s compare the embedded photos above to Natasha’s hair in Iron Man 2, Captain Ameria: The Winter Soldier, Captain America: Civil War, and Avengers: Endgame.

We’ve known Black Widow would be a “period piece” based on previous information reported by The Hollywood Reporter. Then, the release of Avengers: Endgame, where Black Widow sacrificed herself so the Avengers could obtain the Soul Stone, further confirmed that Black Widow would have to serve as some kind of prequel that took place before any of the Avengers films.

While fans mourned the loss of Natasha in Endgame, those same devotees will be excited to see Black Widow again in her own, long-awaited solo film regardless of when exactly it takes place.

Black Widow does not yet have a release date.