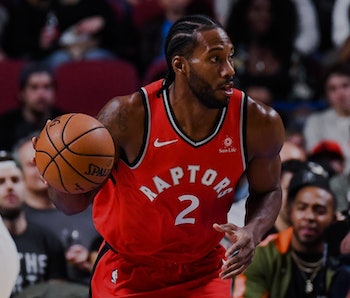 Thursday night marks Game 1 of the NBA Finals, an unprecedented event for lifetime underdogs the Toronto Raptors and business as usual for the Golden State Warriors, who are now competing in their fifth consecutive championship series. By all respects, it seems like a fairly lopsided matchup, despite the now-legendary performance of Toronto fun guy Kawhi Leonard in the playoffs so far. But the Raptors have at least one thing going for them: The power of jet lag.

"The Warriors could have a disadvantage."

Ravi Allada, Ph.D., is a distinguished professor of neurobiology at Northwestern University, and an expert of the effect of jet lag on athletic performance. In 2017, Allada and two colleagues published a PNAS study that used 20 years of Major League Baseball data to show that jet lag affects specific aspects of human performance — when it occurs in a specific direction. He tells Inverse that he would expect the same for basketball.

“We generally found effects of eastward travel (consistent with jet lag) on the performance of both home and away teams,” he says.

Jet lag, as it’s defined by experts in the journal Sports Health, is a “syndrome involving insomnia or excessive daytime sleepiness following travel across at least 2 time zones” and is linked to “impaired daytime function,” “general malaise,” and other somatic complaints, including gastrointestinal disruption. That’s why it is great news — for Toronto.

Why Eastward Travel Disadvantages the Warriors

While the 9 p.m. Eastern start time of Game 1 is annoying for fans on the Atlantic coast trying to get to bed at a decent hour, it may be even worse for the Warriors, who will travel East to Toronto for Game 1 on Thursday.

“The Warriors could have a disadvantage, as they will be making significant eastward travel and thus could experience the effects of jet lag,” says Allada.

In the study on MLB players, Allada and his team found a correlation between jet lag caused by eastward travel and impaired offensive and defensive performance by the home team, as well as impaired away-team defensive performance. “The largest and most consistent effects were on home runs allowed by pitchers,” he adds.

The downside of traveling eastward may seem counterintuitive, since we think of traveling west as generally “adding more hours to your day.” Departing from Toronto at 8 a.m. Eastern, for example, means landing in San Francisco around 10:30 a.m. Pacific, which, if you’re a tourist looking to spend more waking hours exploring, can seem like a good thing. But for an athlete, jet lag isn’t about hours added or lost; it’s about your body clock being confused about what time of day it really is.

The body’s circadian rhythm controls the timing of its systems on a 24-hour clock — in particular, the cycle of sleeping and waking. It sets its timing by the rising of the sun; under natural circumstances, most people sleep when it gets dark and wake up with the light. But artificial factors, like airplane travel and the blue light from our phones, can confuse the circadian rhythm. Difficulty sleeping, and a host of other physical effects, can ensue.

Allada and his team concluded: “Our finding that most major jet-lag effects are evident after eastward but not westward travel supports the hypothesis that observed effects are due to a failure of the circadian clock to synchronize to the environmental light–dark cycles and not due to general travel effects.”

What the Warriors Can Do To Mitigate Jet Lag’s Effects

The Warriors’ messed-up circadian clocks will be a boon for the Raptors, especially in the later games of the series, because the Warriors will have less time between games to adjust to eastward travel as the series wears on. If Golden State wants to mitigate jet lag’s effects, it’ll have to happen now, says Allada.

"One possibility would be the Warriors to travel early to Toronto…"

“One possibility would be the Warriors to travel early to Toronto (possible at the beginning of the series but harder later in the series) so that they can adapt to the new time zone,” he says.

Fortunately for Golden State fans like Allada (“Rooting for the Warriors—I love watching Steph Curry and Draymond Green,” he says), the reigning champs landed in Toronto on Tuesday, two days ahead of game time. According to a 2012 Sports Health study, “jet lag symptoms usually persist 1 day for each time zone crossed until the body realigns its circadian clock, regardless of direction traveled.”

Going forward, Toronto, who won both home and away games against the Warriors this season, will have the circadian rhythm on their side, though whether it’ll be what finally throws off Golden State’s relentlessly winning beat is anyone’s guess.