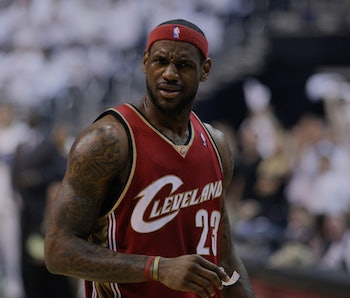 Everywhere in the natural world, the constant struggle for survival is the engine that drives life onwards. The exception may be the NBA, where new research published in Frontiers in Psychology shows that the struggle to survive in certain do-or-die playoff games may actually lead to a team’s demise. The findings won’t make any sore Cleveland Cavaliers or Toronto Raptors fans feel any better about the abysmal sweeps that occurred in the recent NBA playoffs, but they may explain why they happened.

In the paper, sociologist Yair Galily, Ph.D. and his team from the Interdisciplinary Center in Herza, Israel show, through a statistical analysis of 1,930 NBA playoff games, that “choking” is real — and that it’s more likely to happen in certain team situations.

Taking into account factors like team strength and the stakes of certain playoff games, they found that the probability a home team would win when faced with elimination dropped over ten percentage points — from a 66.7 percent chance of victory to a 49 percent chance — in elimination games. These findings show the opposite of what previous studies have suggested about the link between high pressure and performance. “Theories predict that individuals exert the most effort, and therefore produce their best performances, when the possible returns for their success — or the consequences of their failure — are highest,” Galily explained in a statement published Tuesday, noting that his study shows that this is, at least in the NBA, not always the case.

There was one major difference between the new study and older ones: Galily wasn’t interested in individuals botching “closed skills,” like penalty kicks or free throws, which previous studies usually observed in participants under laboratory conditions. Galily was interested in quantifying whether a team was collectively more likely to choke under pressure in real-life situations.

“As choking in various sports has regularly been examined through contestants executing individual sports or closed skills,” the team writes. “…this study uses a quantitative methodology to provide an exceptional insight into the collective performance.”

The seven-game series model used by the NBA provided a natural experiment structure for Galily’s research (although his research also included games from 2003 and earlier, when the playoffs were only a five-game series). The team with the stronger record going into the playoffs gets to host games one, two and five and seven and in this study is referred to the “home court advantage team.” Unsurprisingly, Galily found that, when games weren’t critical, the home court advantage team had a higher chance of victory at home. This may sound familiar to anyone who watched the Eastern Conference Finals between the Cavaliers and the Celtics this past playoff season: Over the first six games, the Celtics won every game at home and were systematically destroyed on the road.

But Galily’s analysis showed that home teams won only 49 percent of “critical games,” which implies that increased pressure seems to neutralize the performance-boosting effects of home court advantage. He admits that “we should keep in mind that teams facing elimination in a series are going to a game with a stronger opponent that has outperformed them so far,” but is confident that he was able to control for that variable in his statistical analysis. The study’s findings, the team notes, can be applied not only to losing basketball teams but also to anyone in a high-pressure environment: Employers, for example, should consider the effect that high pressure will have on the performance of their stressed-out employees.

Despite what these findings may say about the NBA, arguably the best part of this paper was the introduction, which told a detailed story about Chinese warlord Xiang Yu, who burned his ships in 210 BC to inspire his troops to fight their way out of a hopeless, high-pressure situation. Xiang Yu’s story suggests that choking isn’t always inevitable — but then again, the phrase “do-or-die” has much higher stakes in war than it does in basketball.

More like this
Mind and Body
Jan. 21, 2023
Procrastination study suggests a link to shoulder pain, bad sleep, and more
By Eva Skillgate, Alexander Rozental, Fred Johansson and The Conversation
Mind and Body
Jan. 22, 2023
Cyclic breathing: Why experts say just 5 minutes a day can reduce stress
By Sarah Sloat
Mind and Body
Jan. 30, 2023
Does the Best Workout Exist? Exercise Scientists All Agree on One Thing
By Katie MacBride
LEARN SOMETHING NEW EVERY DAY.
Related Tags
Share: