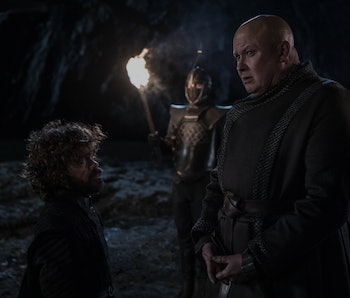 All bets are off when it comes to predicting how the Game of Thrones series finale will wrap things up on Sunday, May 19. Daenerys appears to have gone full Mad Queen and seems ready to take the throne no matter what, leaving the fate of her advisors, army, and the rest of Westeros up in the air. Now, a new theory claims that Varys might have posthumously succeeded in figuring out a way to keep Dany from taking the throne, and if it’s right, it would give tons of clarity on how Game of Thrones Season 8, Episode 6 ends its epic story.

It’s possible that Varys did succeed in poisoning Dany, but not in the way you think.

Possible spoilers for the Game of Thrones series finale ahead.

Varys died early in Season 8, Episode 5, “The Bells,” but his plan to remove Dany as a contender for the throne might still succeed. Dany figured out early in the episode that both Tyrion and Varys knew about Jon Snow’s true identity as Aegon Targaryen, correctly guessing that Jon spilled the beans to Sansa and she, in turn, told Dany’s closest advisors.

But of all those characters, only Varys acted directly on the information, and he paid the ultimate price for it. Before his death by fiery execution, we saw the Master of Spies write up several letters revealing Jon’s true identity, some of which he probably succeeded in sending off by raven, but what if he was planning something even bigger? And what if it worked?

Before Varys was executed, “The Bells” opened with a scene showing Varys writing one of those treasonous letters. Suddenly, he’s interrupted by a young girl named Martha coming in to tell him that Dany is refusing to eat anything as she mourns the death of Missandei. Varys tells her that “we’ll try again later,” which is easy at first to interpret as Varys simply wanting Dany to eat something, anything, so she can carry on with her mission.

But fans were quick to point out that Varys may have been up to something more sinister. With a spy inside the kitchen, he could have been conspiring to kill Daenerys with poison. Now that Varys is dead, it might seem like that plan failed, but perhaps it’s already succeeded.

In a post to the GoT Theories subreddit, redditor u/J_Mrad argues that Varys wasn’t trying to kill Dany with poison or even weaken her ahead of the battle. Instead, what if he used a special poison to drive her insane? This would have prompted her transformation into Mad Queen that will likely force one of her remaining supporters (Jon Snow, Tyrion, or Arya) to oppose her rule in the Game of Thrones finale.

The theory even points to evidence from the book that such a poison exists: Basilisk’s blood.

It’s established in the A Song of Ice and Fire books that Basilisk’s blood gives off a meat-like smell but induces rabidness in anyone or anything that eats it. In the books, Oberyn Martell explains the effects of Basilisk’s blood, saying:

“Basilisk blood. It will give cooked meat a savory smell. But, if eaten, it produces violent madness … in beasts as well as men. A mouse will attack a lion after a taste of Basilisk blood. But to a man who knows his heart, is not passion a form of madness?”

Of all the theories that have come out of the woodwork about Dany’s fate and why she went full Mad Queen, this once holds a decent bit of water. It makes sense that Varys of all people would have a poison like Basilisk’s blood hidden away, waiting to be used on the right occasion, and the effects of Basilisk’s blood seem to match up with Dany’s behavior at King’s Landing.

Of course, there were plenty of signs throughout Season 8 (and the entire series) that Daenerys was heading down this path, but perhaps Varys and his Basilisk’s blood gave Dany the push she needed to truly become the Mad Queen.

The Game of Thrones series finale airs Sunday, May 19 at 9 p.m. Eastern on HBO.