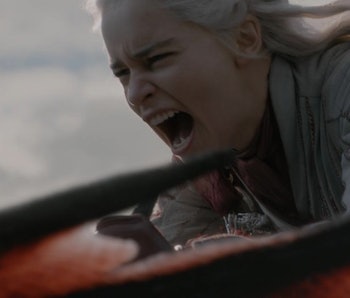 Game of Thrones surprised virtually no one in Season 8, Episode 5 by turning Daenerys Targaryen into a bloodthirsty “Mad Queen.” But what caused this transformation? Maybe it was the death of Missandei, or Jorah, or two of her dragons. (Wow, Dany’s been through a lot.) Maybe it was all those bells at King’s Landing, or maybe it’s a development Game of Thrones has been leading up to for years.

Look, we know foreshadowing isn’t the same as actual character development, but considering the frantic pacing Game of Thrones has adopted in Seasons 7 and 8, it will have to do. On that note, an extremely detailed Reddit post from redditor u/Caprica1 details every single moment of foreshadowing and character development that brought Daenerys from Khaleesi to Mad Queen. Here are the 40 scenes from Game of Thrones that set up Season 8, Episode 5’s big “twist.”

40.) In Season 1, Episode 6, after Dany’s brother Viserys sees how much the Dothraki love Daenerys, he responds with jealousy, saying, “Who can rule without wealth or fear of love?” Dany echoes this statement in the moments before the Battle of King’s Landing (and during it).

However, as redditor u/Rodrick_The_Reader points out, a quote from the books suggests that Dany herself may be the actual fulfillment of this prophecy.

Fierce as a storm this prince will be. His enemies will tremble before him, and their wives will weep tears of blood and rend their flesh in grief. The bells in his hair will sing his coming, and the milk men in the stone tents will fear his name. The prince is riding, and he shall be the stallion who mounts the world.

The word bells here is a reference to the beads the Dothraki wear in their hair, but after “The Bells” episode of Game of Thrones, it may have taken on a whole new meaning.

38.) In Season 2, Episode 4, Dany decrees, “When my dragons are grown … we will lay waste to armies and burn cities to the ground.”

36.) In Season 2, Episode 7, Cersei Lannister says, “Half the Targaryens went mad, didn’t they? What’s the saying? ‘Every time a Targaryen is born, the gods flip a coin.’”

She was referencing her own incest babies with Jaime, but it was also an indirect warning about Daenerys’ future..

35.) In the Season 2 finale, Dany has a vision of the Iron Throne room destroyed and covered in ash. She walks towards the throne but doesn’t actually touch it.

Here’s a bit more analysis of that vision in the aftermath of Season 8.

34.) In Season 3, Episode 3, Dany states plainly that her dead brother Rhaegar “was not the last dragon.”

She clearly believed herself to be a dragon, too, but is that a good thing?

33.) In Episode 4, Daenerys executes over a hundred nobles from the city of Meereen, but when she learns in Episode 6 that some of them were innocent, she doesn’t seem to care.

32.) In Episode 5, Daenerys says to Jorah, “You counseled me against rashness once in Qarth. I didn’t listen. It all worked out well.”

Clearly, she learned a valuable lesson about the power of violence.

“I wouldn’t be here to help you if Ned Stark had done to me what you want to do to the masters of Yunkai,” he says.

30.) In the same episode, Dany replies to Jorah: “They can live in my new world, or they can die in their old one.”

She took the same approach in the Battle of King’s Landing.

29.) In Season 5, Episode 5, Dany executes even more noblemen in Meereen in an attempt to scare the rest into submission. It doesn’t work.

28.) In the same episode, she agrees to reopen the fighting pits, possibly showing an inclination towards violence.

This famous line seemed to suggest she wanted to end the cycle of tyranny in Westeros, but perhaps it was just another hint at more violence.

26.) In Season 6, Episode 4, Daenerys kills the Dothraki leaders to gain more power. Will she do the same to the Starks in the Game of Thrones series finale?

25.) In Episode 6, Daario puts it bluntly: “You weren’t made to sit on a chair in a palace. You’re a conquerer, Daenerys Stormborn.”

Perhaps he was right.

24.) Also in Episode 6, Dany tells the Dothraki, “Will you kill my enemies in their iron suits and tear down their stone houses?”

23.) In Episode 9, Dany clashes with Tyrion Lannister over whether to destroy a city. Tyrion compares her plan to something her father, the Mad King, would do.

22.) In Season 7, Episode 2, Dany considers attacking King’s Landing directly with all three dragons, but Tyrion convinces her not to. This marks the beginning of several poor decisions by Tyrion that lead Daenerys down the path to the Mad Queen.

21.) In the same episode, Olenna Tyrell gives Dany some powerful advice that clearly resonated: “Commoners and nobles are all children really,” she says. “They won’t obey you unless they fear you.”

Later, Olenna adds, “You’re a dragon. Be a dragon.”

19.) In the same episode, she threatens to ignore Tyrion’s further advice and burn down King’s Landing.

“Enough with the clever plans,” she says. “I have three large dragons. I’m going to fly them to the Red Keep.”

18.) At the loot train attack, Dany decides to execute Randyll and Dickon Tarly by dragon fire when they refuse to bend the knee. She could have imprisoned them, but she opts to kill the Lannister supporters instead.

17.) In the same episode, Varys warns Tyrion that Daenerys could become a Mad Queen.

“You need to find a way to make her listen,” he says. Whoops.

16.) Later in that episode, Tyrion comes up with another plan that will eventually backfire. His bright idea is to win Cersei over by kidnapping a wight and bringing it to King’s Landing. We see this play out over several episodes, leading to the death of Dany’s dragon Viserion and Cersei’s eventual betrayal. Again, whoops.

15.) In the season premiere, Lyanna Mormont calls out Jon Snow for bending the knee to Daenerys after the North proclaimed him their king. This is the first major moment Dany realizes she doesn’t have much support in the North or in Westeros in general.

14.) In Episode 2, Dany becomes angry at Tyrion yet again. “Either you are a traitor or a fool,” she says.

We’re starting to think that if Daenerys had never listened to Tyrion, her entire invasion would have gone a lot better.

13.) In Season 8, Episode 3, Ser Jorah Mormont dies while defending Dany during the Great Battle of Winterfell. As one of the few cooling influences on Daenerys, his death sets the stage for the Mad Queen’s arrival.

12.) At the start of Episode 4, Dany watches others heap praise on Jon Snow and becomes increasingly concerned about her claim to the throne. (She already knows that Jon is the rightful Targaryen heir.)

11.) In one particularly telling moment from that same scene, Tormund exclaims, “What kind of person climbs on a fucking dragon? A madman, or a king!” On the word “madman,” the camera cuts to Dany before returning to Jon for “king.”

10.) Later on in Episode 4, when Dany and Jon are alone, she says she still loves him, but he pulls away. The realization that they’re related is too much for Jon Snow, setting Dany down a dark path.

9.) In the same scene, Dany vocalizes her fears: “I saw them gathered around you,” she says. “I saw the way they looked at you. I know that look. So many people have looked at me that way but never here.”

8.) Once Dany heads south to King’s Landing in Episode 4, Varys tries to dissuade her from burning down King’s Landing. In response, Dany says, ““I’m here to save the world from tyrants … and I will serve it, no matter the cost.”

Well, now we know the cost.

7.) Dany even predicts exactly what will happen at the Battle of King’s Landing one episode earlier, saying, “Perhaps it’s good the people see Daenerys Stormborn made every effort to avoid bloodshed and Cersei Lannister refused. They should know whom to blame when the sky falls down on them.”

6.) If she was still alive, she’d probably regret it, but Missandei’s last words to Daenerys likely caused much of the bloodshed at King’s Landing.

Just before her execution, Missandei shouted “Dracarys!” One episode later, Dany used the same command to reign fire on the city.

5.) In Episode 5, Varys repeats this famous line one more time: “They say every time a Targaryen is born, the gods toss a coin and the world holds its breath.”

4.) Later, Daenerys reveals her battle plan to Jon, explaining that the only way she’ll be able to control the Seven Kingdoms is by burning them into submission first.

“Far more people in Westeros love you than love me,” she says. “I don’t have love here. I only have fear.”

3.) When Dany tries to kiss Jon again and he pulls back, that only solidifies her plan.

2.) Near the end of Episode 5, Dany makes it clear to Tyrion that she’s more than willing to sacrifice thousands of innocent lives in the present to secure what she believes is a better future.

“Our mercy is our strength,” she says. “Our mercy toward future generations who will not be held hostage by a tyrant.”

1.) Finally, Dany’s last words to Tyrion in Game of Thrones Season 8, Episode 5 serve as a final warning that we’re about to see a Mad Queen unbound.

The Game of Thrones series finale airs Sunday, May 19 at 9 p.m. Eastern.