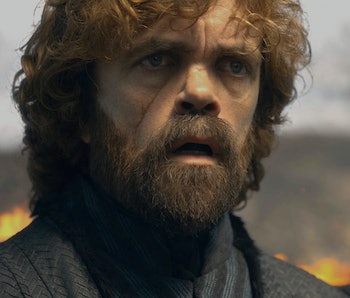 Game of Thrones Season 8, Episode 5, “The Bells,” finally brought us the showdown at King’s Landing we’ve been waiting for, and while the 80-minute episode did plenty to move the plot forward ahead of next week’s finale, it also featured a few great Easter egg callbacks to key moments from Game of Thrones history.

Here are three Easter eggs from Game of Thrones Season 8, Episode 5 that you might have missed.

Warning: Clegane-sized spoilers for Game of Thrones Season 8, Episode 5 ahead.

3. The Mountain Goes for the Eyes (Again)

This one’s pretty obvious, but it’s worth mentioning just because of how epic the final showdown between the Hound and the Mountain turned out. We were already hyped for Cleganebowl, but the combination of an incredible backdrop (the crumbling Red Keep engulfed in dragon flame), an excellent score, and this perfect reference to Season 4 managed to exceed our expectations.

You definitely remember that horrifying moment in the Season 4 episode “The Mountain and the Viper,” where Gregor Clegane jammed his thumbs into Oberyn Martell’s eyes and squeezed until his head exploded. Well, he tried the same move in “The Bells” on his brother Sandor.

Thankfully, it didn’t work, and the Hound was able to kill the Mountain, but only by sacrificing himself, too. The brothers ended up dying together as they fell off the castle tower into the flames below.

2. Harry Strickland Is No Jon Snow

So much for the Golden Company, right? The much-hyped mercenary army ended up amounting to nothing after Daenerys attacked them from behind with her dragon. Immediately afterwards, an army of Unsullied, Dothraki, and northerners charged against their remaining enemies, leaving the Golden Company leader, Harry Strickland, totally exposed.

It was a direct reference to the Battle of the Bastards, when Jon Snow faced down an army of attacking Ramsay Bolton supporters on his own. But unlike Snow, Strickland immediately turned and ran, not that it did him any good.

When Tyrion Lannister finds out his brother, Jaime, has been captured by Dany’s army, he does the stupidest thing possible and decides to free the Kingslayer. It’s all part of an even stupider plan that we know won’t work as soon as Tyrion says the words out loud, but that’s alright because it led to one of the most touching moments in Game of Thrones Season 8, Episode 5 (and possibly in the entire series).

Tyrion visiting a locked-up Jaime also feels like a direct reference to Season 4, when their roles were reversed. Tyrion was imprisoned for allegedly killing King Joffrey, and Jaime visited him in the Red Keep dungeon. It was a touching moment that only feels more powerful in hindsight after Season 8, Episode 5.

The Game of Thrones finale airs Sunday, May 19 at 9 p.m. Eastern on HBO.

More like this
Entertainment
7.31.2022 12:00 PM
'House of the Dragon' will obliterate one annoying 'Game of Thrones' rule
By Alex Welch
Entertainment
8 hours ago
Westworld Season 4 ending explained: Why we probably don't need Season 5
By Ryan Britt
Entertainment
8.12.2022 7:00 AM
Everything We Know About 'For All Mankind 'Season 4
By Ryan Britt
Share: