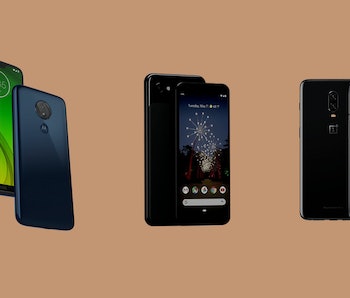 Google released its first mid-range phone last week, the Pixel 3a and 3a XL for an unprecedented $399 and $479 price point. It’s a sign that the age of the premium smartphone is waning: To date, Google has always released high end smartphones like the Pixel 3 and 3 XL, which cost $799 and $899 respectively. Other smartphone makers will continue to follow.

To achieve this new price-point, Google cut back on premium hardware specs and leaned into what it does best: software. The Pixel 3a isn’t water resistant, doesn’t support wireless charging, and uses a polycarbonate shell instead of a glass back. But even with these downgrades Google has imbued the phones with premium software features that have wowed reviewers.

Mainly, the reason to buy the Pixel 3a is probably its renown camera features like Night Sight, all of which are present in a device that costs under $400. But the Pixel 3a is far from the only mid-range smartphone that’s beginning to offer truly premium features.

Two in particular come to mind. Both Motorola G7 Power and the OnePlus 6T offer their own budget smartphones with unique capabilities that will make the devices feel high-end, depending on what you’re looking for. All three of these phones fall below the $600 mark but come with features you’d expect on a phone that costs around $1,000.

Pixel phones’ number one selling point have always been their cameras. Unlike the majority of premium smartphones that opt for a multi-lens solution, Google has always put single lens on the back of its phones and enhanced its images using A.I..

“I cannot stress enough how remarkable it is to have a camera this good on a phone at this price,” Dieter Bohn wrote in his Pixel 3a review for The Verge.

For half the cost of the original Pixel 3, this 3a is the ideal phone for a smartphone photography fan on a budget. Here’s what else to expect on the device:

If you care less about your smartphone’s camera — and more about how long you can go without a charge — than you might want to look at Motorola’s Moto G7 Power. It was part of a trio of budget-friendly smartphones smartphones the company launched just in February, and the Moto G7 Power is the most standout of the bunch. The smartphone’s defining feature is its 5,000mAh battery that can delivery up to 3 days of battery life, which is almost double the capacity of the Pixel 3a.

When the device does run out of battery, users won’t have to wait very long for it to juice up, either. The G7 Power supports 15-watt fast charging that can give it nine hours of battery life in only 15 minutes. That makes it the G7 Power the ideal phone for anyone who finds themselves struggling to keep their phone from shutting down at the end of the day, though its other specs may be found wanting by some users.

Here’s the rest of its specs:

The OnePlus 6T is the priciest of the three, but it is by-far the most well designed and elegant of the smartphones you can buy at this price range. Its teardrop notch gives it the most screen-real estate, it packs two rear cameras, and it can be unlocked using facial recognition or an in-screen fingerprint reader.

This phone is the closest you’ll get to a full-fledged premium experience without breaking the bank. It packs some of the iPhone XS marquee perks for half the price. Here everything else that phone will come with:

While premium smartphone launches may have even begun to get a bit boring — and those are the launches that go well — the “it’s been done already” trend is undoubtedly going to be great for the consumer. Mid-range smartphones will require ever-fewer trade-offs than their flashier counterparts, and getting truly cutting edge features will continue getting easier and cheaper for the masses.

More like this
Innovation
9 hours ago
Indoor lights make us sick — this technology could fix that
By Miriam Fauzia
Innovation
8 hours ago
Will Miami exist in 2050? 4 strategies could keep U.S. coastal cities afloat
By James Gaines
Innovation
8.11.2022 11:00 AM
“Quantum materials” could give the human brain a run for its money, scientists say
By Nathaniel Scharping
Related Tags
Share: