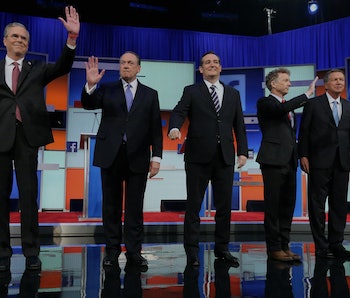 Last week, we brought you the news that Mr. Deez Nuts was running for president. And polling well. The Iowa independent quickly went from meme to legitimate candidate for anybody who thought the government was a joke anyway. Rolling Stone sought out the elusive Mr. Nuts, only to find out his candidacy will be over before it can go any further: He’s 15.

Brady C. Olson is the rising high school sophomore behind Deez Nuts, who did, in fact, take the name from the “Bofa meme.” He’s not registered (he’s 15), but says he sides with the Libertarian Party. If he could vote, which he can’t, he said he’d pick Bernie Sanders (an independent, despite running for the Democratic nomination) or Gary Johnson (a Libertarian). Although still too young to be president (because of our teen-hating Founding Fathers), Olson pitched himself well: “I’m young and I think I have fresher ideas because whatever decisions I make would have longer effects on me.”

Deez Nuts showed that Americans are hungry for a true non-establishment candidate, someone willing to bust down the oppressive doors of the White House with some outside-thinking. Who better to do it than a teen? Teen Prez knows what’s cool and that a divided government would be, like, super unchill. Deez Nuts was a radical candidate, which was radical.