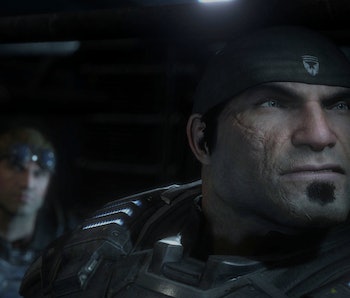 In 2006, the first teaser trailer for Gears of War was burned in the hearts and minds of gamers. All commercials are meant to inspire sales, and for Gears it worked like gangbusters. It topped one million sales within its first two weeks and spawned a massive, triple-A franchise for Microsoft’s Xbox brand.

It was the first look at Epic Games’ promisingly-epic shooter, but the trailer made it unlike the Halos and Call of Dutys it competed against. Commonly referred to as “Mad World” because of the Gary Jules song it uses, the trailer utilized the song’s sullen state of mind as wallpaper for the game’s destroyed, decaying world.

And it was just wallpaper, because it fundamentally didn’t make any goddamn sense.

It’s remembered nearly a decade later for its moody, emo-laced meditation, which isn’t typically associated to an uber-violent bullet party. With a title like Gears of War you expect a thrilling ride to hell with shotguns. Unfortunately, Gears of War is just a thrilling ride to hell with shotguns. Throughout the 6-8 hour story campaign and the multiplayer skirmishes, there is little of the poetic nihilism the “Mad World” trailer promises.

I had friends who saw the ad and immediately bought an Xbox 360 just to play it. I bought into it too, for the first time believing that there was intelligent, heartfelt meaning for the chaos I unleashed from an assault rifle. I was also a teenager.

It’s the song. It’s why anyone remembers this trailer, and the power of the song’s emotion blinds the fact it’s used so erroneously. “Mad World” is about the emotional storms of being a teenager in the first-world. Besides failing to find meaning in the meaningless, there’s jack shit in the song that resonates with the game in any genuine way.

This is the original version, as played by Tears For Fears:

“It’s very much a voyeur’s song. It’s looking out at a mad world from the eyes of a teenager,” said Tears For Fears’ Curt Smith in the album footnotes for The Hurting’s rerelease.

In 2001, Gary Jules performed a cover of “Mad World” for the definitive film on pretentious teen angst, Donnie Darko. His stripped-down piano rendition is supremely fitting… for Donnie Darko, which at the time of Gears of War’s release had achieved cultural status with the likes of The Boondock Saints: shallow coolness. For Gears of War, like Darko and Boondock Saints, the trailer is cheaply-directed, attempting to make rampant violence profound but winds up more LiveJournal than Nietzsche.

To prove the song has little bearing on Gears of War’s thematic tone, here’s the Tears For Fears rendition on the same trailer:

Fits like a glove you’re putting on your foot.

The formula isn’t wrong, just almost always wrongfully executed. Juxtaposing music with visuals is a tightrope. Very few filmmakers and editors can responsibly pull it off.

And it has been done well in video game trailers. Mirror’s Edge used the tactic more appropriately. In it, we’re introduced to the game’s novel mechanics and the pop ballad “Still Alive” (written specifically for the game) resonates with its characters’ rebellion against the overwhelming antagonistic forces.

And then, there’s Fallout 3. Like Gears of War, it shows a decaying world. Unlike Gears of War, everything else. The song lyrically resonates with the game’s premise, and its upbeat outlook contrasts sharply with the grim environment.

“Mad World” gained such notoriety that it inspired parodies, as successful things inevitably do. Ironically, this spoof from Battlefield: Bad Company works because it introduces an actual element you will find in the game — its sense of humor — whereas Gears failed to introduce much besides big ass monsters and the diving mechanic. A spoof worked better than the thing it was spoofing.

But piling on Gears of War isn’t fair. Juxtaposing sound and visuals isn’t easy, and thus they aren’t the only guilty party. 2011’s Dead Island are arguably harsher violators, as the family terrorized in it aren’t a part of the main story.

After Gears of War, the series continued to ape “Mad World”‘s M.O. and unfathomably kept missing the point.

In 2015, with the release of Gears of War: Ultimate Edition, a remastered version of the first Gears of War for the Xbox One, prompted a new “Mad World” trailer that banks on nostalgia over poignancy.

This doesn’t deserve so much vitriol: It’s an affectionate reminder of how the massively successful series began based on well-intentioned storytelling that only faltered because we thought too much about it. And perhaps, that was the point all along.

In the album notes of Tears For Fears’ The Hurting, bandmate Roland Orzabal said bluntly:

Lyrically the song is pretty loose. It throws together a lot of different images to paint a picture without saying anything specific about the world.

Maybe “Mad World” does fit after all.