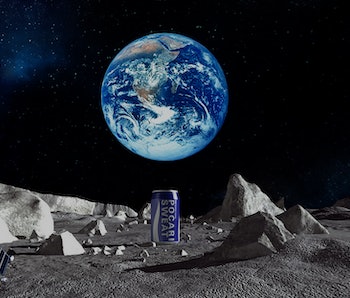 It’s one small step for commerce, one giant leap for overkill advertising. Next year, Japanese soft drink company Otsuka Pharmaceutical Co. plans to drop a specially made can of its signature drink, Pocari Sweat, onto the surface of the moon.

The company hopes to get the can to the lunar surface with the help of American company Astrobotic Technology’s Griffin Lander, an autonomous lunar rover set to launch aboard a SpaceX Falcon9 rocket in 2016. The lander was originally built by a team competing for the Google Lunar X Prize against other privately funded lunar rover specialists.

The Lunar Dream’s titanium can, topped with a custom titanium opener, will be made in Japan and Singapore. It features a vacuum sealed powdered mixture of the Pocari Sweat drink that will last for over 30 years. Not too bad for space, but we’re assuming the regular stuff on terra firma has a three-decade shelf life too. The mixture will ostensibly be left for astronauts to mix with water molecules culled from the lunar surface. The result? The perfect drink to enjoy after a hike over lunar regolith.

But don’t feel left out, the can will also feature random space messages from people around the world that will be etched into the capsule’s base plate using lasers. You can text the company your own message telling whoever will drink this stuff to enjoy it. Or not, it’s your message.

As seen in the appropriately ridiculous video above — where you can also see an accredited professor of robotics say “Pocari Sweat” — the can will be decorated with the drink’s logo using a color anodizing process that electrochemically embeds color into aluminum in such a way that it can survive the harsh lunar environment.