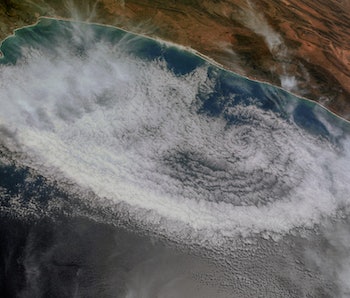 The amount of carbon dioxide released into the air reached an all-time high in 2018, weighing in at 37.1 billion tonnes of the planet-warming gas. Fortunately, through the carbon-capturing abilities of the world’s oceans, about a quarter of it was drawn underwater, where its greenhouse gas effects are put on hold. Increasingly, we’re relying on the oceans as a crutch, but as new research from Columbia University’s Earth Institute reveals, they soon may not be able to store carbon like they used to.

As a new study published Monday in PNAS shows, the oceans, which are warming because of climate change, may start releasing more carbon dioxide back out into the air as a result of bacteria and rising ocean temperatures.

"The ocean carbon cycle is affected in almost innumerable ways by climate change!"

“The ocean carbon cycle is affected in almost innumerable ways by climate change!” first author Frank Pavia, an oceanography graduate student at Columbia, tells Inverse, noting that the oceans have already absorbed up to 25 to 30 percent of industrial carbon emissions from fossil fuel burning and cement production. His study focuses specifically on the increasing ability of marine bacteria to breathe the ocean’s carbon back out into the atmosphere.

The Problem With Carbon Regeneration

Part of the ocean’s carbon-capturing ability comes from its huge populations of photosynthetic plankton, which, like plants, breathe in carbon dioxide and release oxygen. Like their leafy kin, they carry carbon with them in their bodies as they die and sink down to the bottom of the sea. There, carbon can get locked away in their corpses for hundreds of years. They’re estimated to make up 40 to 50 billion tons of solid organic carbon every year.

But not all dead plankton make it to the bottom. Aerobic bacteria — the kind that live in oxygenated environments — feast on the dead plankton as it falls toward the sea floor. Like us, they breathe out carbon dioxide, which bubbles back up to the water’s surface and is released back into the air, completing the cycle of “carbon regeneration.”

These bacteria only live in certain depths of the ocean. At the warm, sun-drenched top layer, aerobic bacteria are known to eat dead phytoplankton and release carbon. But 150 meters down, there’s no more oxygen. Any plankton that make it this far won’t get eaten by those bacteria, thus allowing carbon to sink further down toward the bottom. There, the ocean has another oxygenated zone that supports more bacteria that can complete carbon regeneration, but it is so far below that the carbon stays there for centuries. To mitigate climate change, this is where we want most of our carbon to go.

Scientists used to think that 8 to 10 billion tons of organic carbon made it into the region where carbon is safely stowed away. But as Pavia discovered with co-author Robert Anderson, Ph.D., a Columbia University oceanographer, there’s less carbon being stored in the deep sea and more carbon being regenerated in the rich, shallow areas than scientists once believed. And the bacteria in those regions may soon have even more opportunities to thrive as the oceans get warmer.

“Our findings suggest that organic carbon regeneration to CO2 occurs shallower than previously thought in both gyres (ocean deserts) and oxygen minimum zones near the west coasts of continents,” says Pavia.

Where Bacteria Are Feasting

Pavia and Anderson used data from a research cruise ship that traveled from Peru to Tahiti in 2013, sampling the amount of carbon in seawater from different depths. To get a sense of how warming affects different types of waters, they focused on two specific regions: the rich waters off the coast of South America and the infertile waters of the South Pacific Gyre (a term for an ocean “desert”). Their analysis of the carbon in both these areas showed that only 15 percent of solid carbon makes it to the OMZ, while the rest gets regenerated back into carbon dioxide in shallower waters, where it’s more easily released into the atmosphere.

This effect, says Pavia, will most strongly affect subtropical gyres in the dead center of the North Pacific, South Pacific, North Atlantic, and South Atlantic, as well as in the Indian Ocean. “It’s not because these regions will warm more than other regions, [it’s] because of how warming will alter the nutrient levels and phytoplankton communities living in these regions,” he says.

As the oceans get warmer, the OMZs of the world will grow wider and taller. In both rich waters and gyres, this is expected to cause even more carbon regeneration in the growing shallow regions, decreasing the ocean’s ability to trap carbon near the ocean floor.

The Many Consequences of Ocean Warming

Shallow carbon regeneration isn’t the only issue that will complicate our battle against climate change as the oceans get warmer. Ocean acidification, says Pavia, is the “most important” impact of anthropogenic carbon.

“As CO2 increases in the ocean, it lowers the pH, making it more acidic, decreasing the ocean’s capacity to take up additional CO2 in the future, and diminishing the ability of certain organisms (like corals) to produce skeletons and shells made of calcium carbonate,” he explains.

We’ll feel the effects on land, too. Already, warming oceans are being blamed for stronger waves and the death of crucial marine species. Pavin’s work is a reminder that as we try to figure out how to mitigate Earth’s rising temperatures, it’s important not to forget the abilities of the ocean — which is a crucial tool that could work in our favor, as long as we don’t ruin it first.

Particulate organic carbon (POC) produced in the surface ocean sinks through the water column and is respired at depth, acting as a primary vector sequestering carbon in the abyssal ocean. Atmospheric carbon dioxide levels are sensitive to the length (depth) scale over which respiration converts POC back to in- organic carbon, because shallower waters exchange with the atmosphere more rapidly than deeper ones. However, estimates of this carbon regeneration length scale and its spatiotemporal variability are limited, hindering the ability to characterize its sensitivity to environmental conditions. Here, we present a zonal section of POC fluxes at high vertical and spatial resolution from the GEOTRACES GP16 transect in the eastern tropical South Pacific, based on normalization to the radiogenic thorium isotope 230Th. We find shallower carbon regeneration length scales than previ- ous estimates for the oligotrophic South Pacific gyre, indicating less efficient carbon transfer to the deep ocean. Carbon regener- ation is strongly inhibited within suboxic waters near the Peru coast. Canonical Martin curve power laws inadequately capture POC flux profiles at suboxic stations. We instead fit these profiles using an exponential function with flux preserved at depth, find- ing shallow regeneration but high POC sequestration below 1,000 m. Both regeneration length scales and POC flux at depth closely track the depths at which oxygen concentrations approach zero. Our findings imply that climate warming will result in re- duced ocean carbon storage due to expanding oligotrophic gyres, but opposing effects on ocean carbon storage from expanding suboxic waters will require modeling and future work to disentangle.