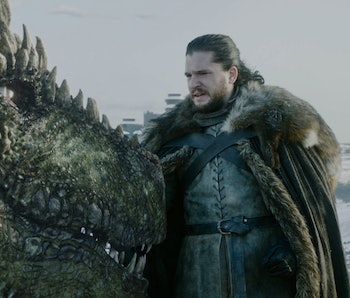 Jon Snow is the rightful heir to the throne of the Seven Kingdoms, but should he be? Jon Snow is being positioned as the one to take the Iron Throne at the end of Game of Thrones Season 8 (barring any surprises in the final three episodes).

You see, as we learned at the end of Season 7, Jon Snow is actually Aegon Targaryen, the son of Rhaegar Targaryen and Lyanna Stark. That makes him the Mad King’s grandson and the rightful heir to the Iron Throne. Now, you might think that Daenerys Targaryen (a direct daughter of the previous king) would have a better claim, but this is Game of Thrones, and the show’s medieval setting means that the line of succession favors men over women.

That’s why Dany freaked out when she learned who Jon’s parents were. (The whole incest thing just doesn’t seem to be an issue.) But even if Jon Snow is entitled to the Iron Throne, that doesn’t mean he deserves it.

Warning: Spoilers for Game of Thrones Season 8, Episode 3 ahead.

Thanks to his lucky victory in the Battle of Winterfell, as well as the imminent civil war against the Mad Queen, Cersei Lannister, it’s now kind of a lock that Jon will sit his northern rear on those melted swords by the series’ end (assuming Cersei doesn’t blow up the entire castle with wildfire, that is).

And if that happens, man, that’s going to be so boring.

In the aftermath of the Battle of Winterfell, Game of Thrones barrels towards its finale with just one question: Who will sit on the Iron Throne? At this point, virtually any of the show’s realistic candidates are as viable as they are also ludicrous. (Enough with the Samwell Tarly theories.) Jon is the only one now with any true right, as the son of Lyanna Stark and Rhaegar Targaryen, first son of King Aerys II, but he also explicitly does not want the throne, which ironically makes him the most qualified and worthy king of Westeros.

Jon Snow, as played by Kit Harington through all eight seasons of the HBO series, is a vanilla protagonist. He was engineered by George R. R. Martin in his brain lab to function as the moral center in his amoral medieval universe. If his younger sister Arya represents the loss of innocence, Jon — originally thought to be the illegitimate son of an upright king who made an oopsie doodle on his marriage vows — is redemption earned.

On paper, Jon is great. The books give glimpses into his thinking, which almost guarantees readers can accept a character no matter their poor decision-making. But on HBO, short of Harington turning to the camera and saying, “This Mance Rayder guy can eat my shorts,” Jon’s glumness made him too passive of a character. He only got by in a world of darkness and death because everyone thought he was kind of an okay guy.

It also does not help that Jon has a knack for the battlefield. Instead of allowing us to sympathize with him through grueling training, we just accept he’s already great with a sword, so he shouldn’t get eaten alive. It’s fine to give characters natural talent, but in trying to make audiences root for them as protagonists, they have to earn it.

The Other Stark, or, How to Do a Hero the Right Way

Take a look at another famous Stark: Tony. A super genius when we met him in Iron Man, Tony Stark still had to build his suit under trying conditions and fight his way out of a cave before becoming a superhero. While Jon Snow had some clashes early in his Night’s Watch career, he didn’t have an equally momentous moment until the Battle of the Bastards, a full five seasons and one fake out death later.

Most of the time, things just happen to Jon rather than because of him. You could argue that this is all built into Snow’s DNA, quite literally, as his true parentage became a much bigger issue as the story of Thrones progressed (see also: Harry Potter). That he should take the Iron Throne just because no one else is worthy of it means there should be no Iron Throne.

Fans and critics have complained about Jon for years, but this week’s episode, “The Long Night,” made everything so crystal clear. Jon Snow is not only boring, but he’s inept and so prone to emotion without reason (I imagine Snow thinking, Imma scream at a dragon, before screaming at a dragon) that he would be a terrible king. I’m glad Jon said he doesn’t want the throne. Unlike the Night King, he’s an actual threat to Westeros’ very existence just by accepting the position.

Avengers: Endgame spoilers, but this is not unlike why Captain America lifted Mjölnir. Steve Rogers wasn’t seeking to rule Asgard, nor was using Thor’s hammer selfish. In his heart, he was true, and his reasons — clobber Thanos to stop him from killing everyone — were just.

But unlike the Marvel Universe, “Who rules Asgard?” wasn’t the driving point of its 11-year narrative. “Who will rule Westeros?” has lingered over Game of Thrones this whole time. Even if the real point of George R. R. Martin’s story is that petty squabbling only makes us vulnerable to real danger — the Night King — the politically minded Thrones was never going to just end with Snow laying the smackdown on the Night King.

It was always going to end with another question of power, another battle of titles, another clash of egos. The wheel turns. If Daenerys is serious about breaking the wheel, she should start with breaking the throne.

As for Jon Snow, let’s acknowledge credit where it’s due. He united as many armies as he could in order to stop the Night King (another “character” with his own host of problems now that he’s in our rearview). The good boy did it! And now it’s time for his watch to end.