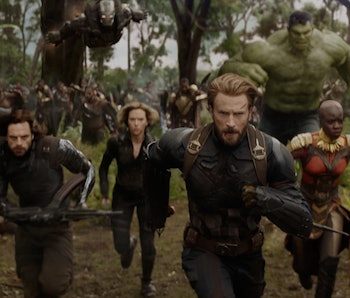 There’s one moment at the very end of Avengers: Endgame that features Captain America and his best friend Bucky Barnes (aka the Winter Soldier) that might’ve irked you. Why did Cap sideline Bucky in favor of his more recent friendship with Sam Wilson (Falcon)? It may have to do with one of Endgame’s more sci-fi plotlines.

In short, Doctor Strange wasn’t the only one who knew about the ending before it happened.

In Endgame, the Avengers travel to different points in time to borrow Infinity Stones so they can un-Snap everyone who Thanos dusted. The plan works, and after the action wraps up, it falls on Steve Rogers (Captain America himself) to travel back in time and return the Infinity Stones.

Rather than make his scheduled return trip, Steve instead lives out his days married to Peggy Carter and shows up a few yards away as an old man. We watch him briefly catch up with Falcon and hand him the Captain America shield, implying that he’ll take up the mantle as America’s hero.

During this sequence of events, Bucky seems distant and withdrawn as he watches from a few yards away. Even before it all happens, when Professor Hulk sends Cap back in time and says, “For him, he’ll be gone as long as he wants. For us, it’ll be a few seconds,” Bucky’s reaction is odd. It’s as if he knows that Steve is taking the long way back.

“Try not to do anything stupid while I’m gone,” Steve shoots back.

“How can I?” Bucky replies. “You take all the stupid with you.” They hug, and Steve spends an entire lifetime in the past.

Endgame is full of odd goodbyes. Peter Parker cries as Tony Stark lies dying, but his wife Pepper Potts offers him a smile and reassurances. Yet here, Sam being the one to talk to Steve first feels off. Remember Captain America: Civil War, when Cap literally went to war just to protect Bucky? Earlier in Endgame, the mere mention of Bucky is enough to disarm a younger Cap in the past. So why is their powerful connection shortchanged here?

The movie never really explains it, but there are a few main possibilities. Either Bucky knows his buddy Steve well enough to guess his plan before he jumps back in time, or at some point offscreen, Cap simply revealed he wasn’t coming back and told Bucky exactly what he was going to do instead.

Either of those options basically boils down to the same core idea: Steve has such a strong bond with Bucky that he can’t keep secrets from his longtime best friend. However, there’s a third possible explanation that’s a little more outlandish but way more exciting. What if, after traveling to the past and marrying Peggy, Steve had another encounter with Bucky?

Imagine a scenario where Steve re-adopts the Captain America persona in the 1940s or ‘50s. Eventually, he would have run into the Winter Soldier, who was being mind-controlled by Hydra to carry out their evil plans. They might have even fought in the past, but because Bucky’s memory was constantly being wiped clean, he wouldn’t have remembered when they met again in Captain America: The Winter Soldier.

Taking things a step further, it’s possible that when Bucky went into rehabilitation in Wakanda after Civil War, he was finally able to access those memories and figure out what Captain America would eventually do at the end of Endgame.

That would explain why Bucky knew Steve wasn’t coming back through the time machine. It also explains why he instantly spotted him on that bench, encouraged Sam to go talk to him first, and why he nodded slightly when Cap handed Falcon the shield.

Look, when it comes to Captain America’s decision to live out his life in the past, we could theorize for hours. Did Steve Rogers have kids? Were those Peggy’s kids? Does that mean a younger Captain America kissed his own niece (by marriage, not by blood) in Civil War? Was an elderly Cap secretly in attendance at Peggy’s funeral?

Ultimately, Cap’s bold choice to live out his days in the past might close the book on Steve Rogers in the present-day, but it presents all sorts of narrative opportunities for new stories. Endgame co-director Joe Russo did say of Captain America actor Chris Evans, “he’s not done yet,” so perhaps we’ll get another movie featuring Steve and Peggy heading up an early version of S.H.E.I.L.D. in the past. Or maybe the upcoming Disney+ series, The Falcon and The Winter Soldier, will feature flashbacks to show Bucky’s interactions with Steve in the ‘60s.

We have no idea, but there’s more to this story than meets the eye.

Avengers: Endgame is currently in theaters.